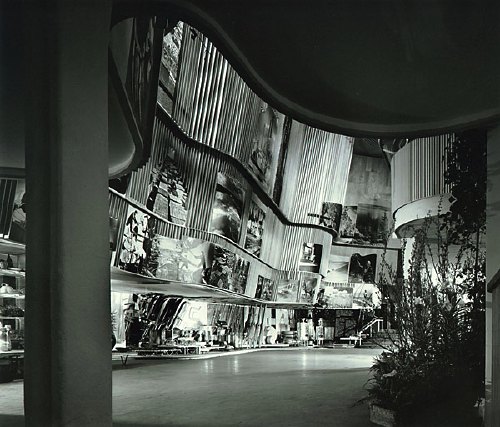 image: vintage silver gelatin print, signed, Ezra Stoller, 1939, via morehousegallery
Do turning back another chapter or two in the history of enlarged pictures, photomurals, and photomontages, where do they turn up the most [besides/before the Museum of Modern Art]? Expos and World’s Fairs. Even more than dioramas, and like the grand cyclorama paintings of earlier eras, giant photos were used by architects–in the service of governments and companies–as modernist, machine age, marketing, mass communication, and propaganda. They were basically highly credible-looking billboards.
None of which is necessarily a bad thing in itself, of course. It’s interesting to note, though, who was creating and using them, because for the most part, it was not artists.
Alvar Aalto’s Finnish Pavilion at the 1939 World’s Fair in New York turns out to have been a stunning and especially instructive example of enlarged photos integrated with modernist architecture. That’s it up top in a photo by –let’s just say I could just as easily title this whole series, “Everything I Know About Photomurals, I Learned From Ezra Stoller.” 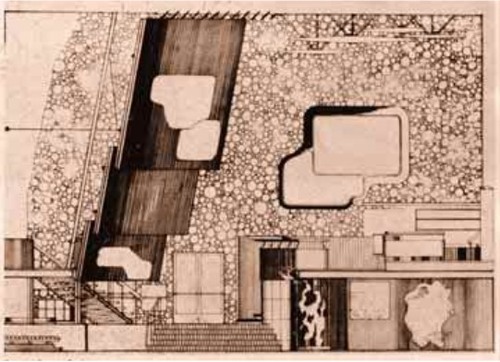 In a plain, rectangular building, Aalto wrapped a second floor exhibition space with an undulating wood-slatted wall, inset with three rows of giant photos [Aalto’s section plan above, via domus, I think] to create a dramatic, infotaining, 52-foot high atrium. A mezzanine restaurant [below] allowed for closer viewing of the photos, which showed, from top down, “Country,” “People,” and “Work,” which culminated, naturally, in the bazaar of real Finnish products underneath. 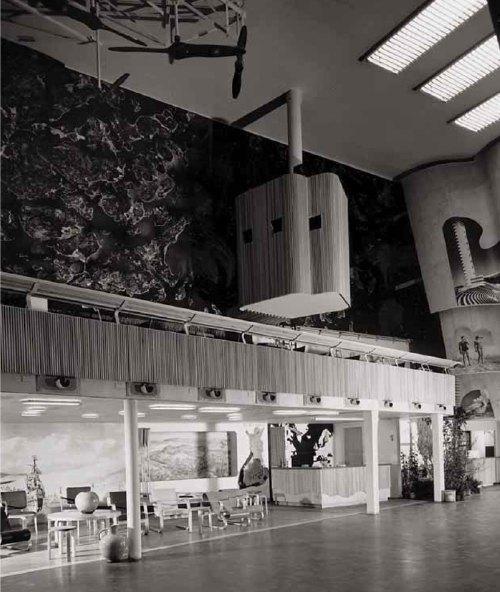 And what’s that box up there hanging dramatically off the wall, besides the key to the photomurals’ media context and appeal? It’s a projection booth. Films, presumably on the subject of Finland’s awesomeness, were projected onto the atrium wall above the exit. I can’t help but see the effectiveness and popularity of large-scale photos as inextricably driven by architects’ attempt to harness the modern media magic of the cinematic experience. And as antecedents for the now-ubiquitous, immersive projection and installation art works. Like steampunk Pipilotti Rist.
1939 Finnish Pavilion info [designboom]