I’m on a bit of a photomural binge at the moment. In email, Dr. Olivier Lugon, he of the awesome article about Stephen Shore’s Signs of Life photomurals, points out two things about Edward Steichen [and, let’s give the man credit, since he’s all over and in that show, Wayne Miller, though with these brackets, where do I put the apostrophe s?] ‘s 1955 show, The Family of Man.
First the good news: The sole [?] remaining copy of the traveling version of The Family of Man was donated to Luxembourg, the country of Steichen’s birth, and it is on permanent display at Chateau Clerveaux. Except that it just closed two weeks ago for two years, for renovation and conservation. So, book your post-Maastricht2012 roadtrips to Luxembourg now! 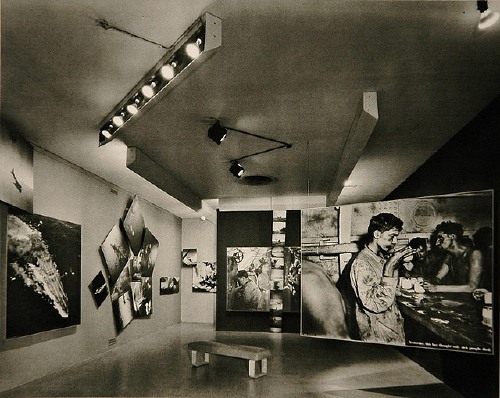 Now the bad news, which is also good news: The installation photo I linked to purporting to be from The Family Of Man is, in fact, not. It is from a 1945 exhibition Steichen did at MoMA titled Power In The Pacific, which was designed by George Kidder Smith.
I say good news, though, because it pushes the photomural story back a decade, and it helps flesh out the context and function of enlarged photography as a mass communications, i.e., propaganda tool. Power In The Pacific was comprised of photographs taken by the Naval Aviation Photographic Unit, which was under the command of Capt. Edward Steichen, and which included Lt. Wayne Miller. Ansel Adams would have been in there, too, but he wanted to delay enlisting for a couple of months, and Steichen wouldn’t have it. Adams went on to photograph the Manzanar Japanese-American internment camp, photos of which were exhibited at MoMA in 1944. [Now those are some photomurals I’d love to see. Except, well, let’s put that in another post.]
Power in the Pacific opened in January, while Steichen was still on active duty, and traveled around the country. [I did not realize this until just now, but Steichen reported to the head of the Navy’s Bureau of Aeronautics, Rear Admiral John S. McCain, Sr. Small world.] Many of the Naval Unit photographers’ work was included in Family of Man.
Which, I just couldn’t resist scanning in a couple of Ezra Stoller’s magnificent photos of Paul Rudolph’s installation from the original Family of Man catalogue. 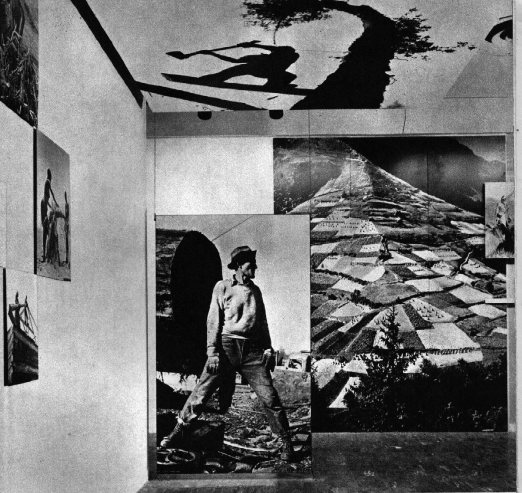 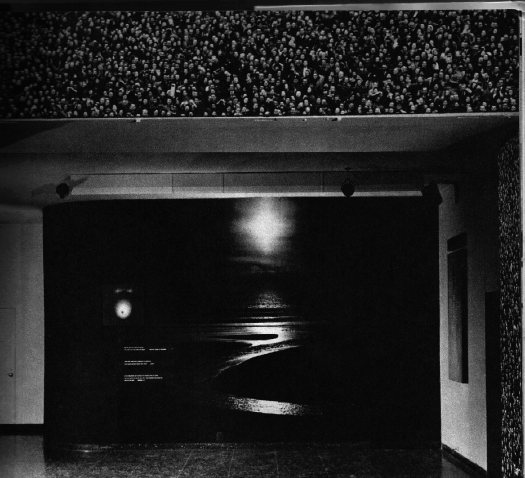 photo by Pat English used as wallpaper framing an unknown landscape.
As seen in Stoller’s photos, Rudolph’s show is an apotheosis of the enlarged photo and mural as an architectural element, a maker of spatial experience. It’s easy to say that photomurals and photomontages are architecture, or marketing, or propaganda, and not art, and it’d be true. But it’s also true that photography itself was not art at the time, either. As for photomurals and giant, painting-sized photos, they were merely the things exhibited in the Museum of Modern Art.