I’ve got a lot of browser tabs to clear before I head to Miami. 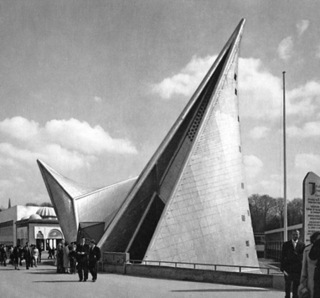 Am I not listening or looking in the right place, or is there really not enough discussion about MoCA’s exhibition of drawings by the composer/architect/polymath Iannis Xenakis?
Xenakis was a longtime collaborator with Le Corbusier. Philipp Oswalt credits him with the introduction of light and projection as tools and “subject[s] of architecture” in the dramatic chapel of the convent at La Tourette.
Tools which would come in handy in the multimedia Poeme Electronique, whose film projection cones and soundscapes drove the form of the 1958 Philips Pavilion [top]. 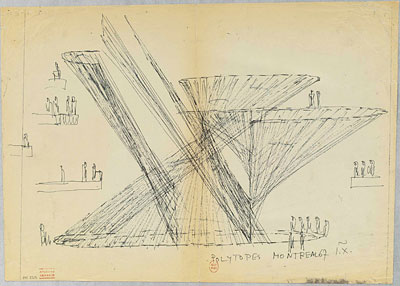 Anyway, the drawings include musical scores, which sometimes appear interchangeable with Xenakis’ schematics and sketches for his later independent installations, including the Polytope for Montreal, above, an abstract light and sound environment, which he created around the time of Expo 67. The Xenakis archive is at the National Library in France. Not sure how accessible it is, but LA might be the best/easiest shot.
Related: Philips Pavilion models spotted in Amsterdam