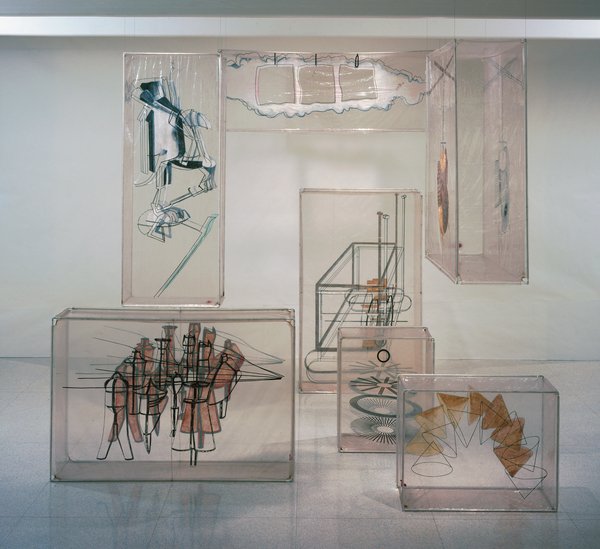 image: walkerart.org
Welcome to one of the oldest tabs in my browser: the inflatable balloon set for Merce Cunningham’s 1968 piece, Walkaround Time, which is based on Marcel Duchamp’s Large Glass, which was made by the company’s artistic director at the time, Jasper Johns.
I’d backed into the pieces–seven cubes of silkscreen-and-paint on clear vinyl, reinforced with aluminum frames–a few months ago, and realized I’d seen them–and not thought much about them–at the opening of the newly expanded Walker Art Center in 2005.
Which I now regret, but which makes Merce’s title resonate a little more. Cunningham dancer and longtime collaborator Carolyn Brown explains that Walkaround Time was a reference to a particular kind of purposeless movement taken from ancient computer history, when “programmers walked about while waiting for their giant room-sized computers to complete their work.” It’s just taken me this long to appreciate–or even to see–the work. And for some great additional links to appear.
I can already tell this is going to go long.
03/2012 UPDATE: Unfortunately, none other than former MCDC stage manager Lew Lloyd informs me that the term “balloon” is not really accurate; they were transparent vinyl boxes fit onto armatures, which could be broken down for travel. Given my noted satelloon bias, I will still think of them as balloons in my heart. For the rest of you, though, remember: not balloons. [end update] 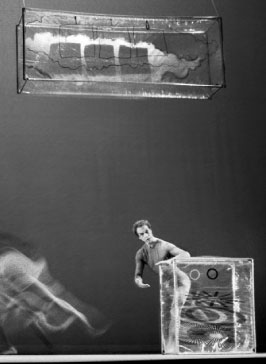 Walkaround Time premiered in Buffalo at the second Festival of the Arts Today. [A few months ago, I wrote about being baffled and amazed by the First Festival of the Arts, which was held in 1965.] It was apparently less than successful, because the dancers were constrained on a small stage by Johns’ giant set elements. [image left via lanaturnerjournal]
In 1999, the pieces were repurposed for “Occasion Piece,” a duet with Merce and Mikhail Baryshnikov., after which the Walker acquired them.
A less precious refabrication of Johns’ set was used for a 2005 restaging of Walkaround Time, at which point Merce told the Guardian that Johns had the idea for the piece during a 1966 dinner at the Duchamps’ house.
Just last month in the Brooklyn Rail, filmmaker Charles Atlas discussed his 1973 film of Walkaround Time, which seems to have been the first of a decades-long collaboration with Cunningham and his company. [A 16mm print is available for rental at the filmmakers’ co-op; the synopsis includes a lot of detailed commentary and criticism by Atlas. So far, I haven’t been able to locate a transferred or digital version.] 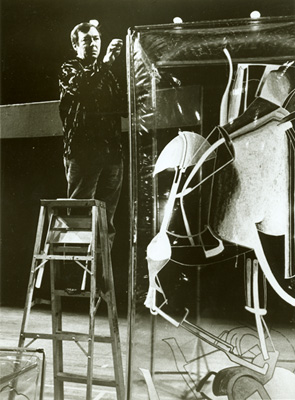 In my research of the Johns flag painting included in Rauschenberg’s Short Circuit, I recently bought Roberta Bernstein’s 1985 Jasper Johns’ Paintings and Sculptures 1954-1974, an adapted doctoral thesis which, since its publication in 1985, has functioned as the first draft of the artist’s catalogue raisonné. [Bernstein is currently preparing the actual painting & sculpture CR under the auspices of the Wildenstein Institute. In September, the Menil Collection announced it would collaborate with Bernstein and complement her efforts by publishing the drawings catalogue raisonné.]
As it happens, Dr. Bernstein was working for Johns in 1968. And she kept a journal. I really, really tried to quote just the bare minimum [image right via walkerart.org]:

“March 4, 1968: Incredible day yesterday. Jasper called at 9:00 AM to ask if I would help him with the Duchamp set (for Merce’s Walkaround Time) which he had been working on for the past few weeks… [The silkscreens were based on Richard Hamilton’s drawings for his copy of the Large Glass made for the Tate Gallery.]… J screened the images on two sides of a plastic box [an inflatable box, made rigid by aluminum rods at the edges…]
On one side of the box, the image was screened in black ink; on the opposite side, J painted over hte screened iage in black, gray, brown, white, silver or violet, approximating Duchamp’s original colors…

Yeah, yeah, the making of. But tell us, what’s Duchamp really like?

We got in a cab and went to 28 West 10th Street. J got out to get D…
D spoke with no French accent; he is short and thin and extremely casual in manner as was as dress; he was wearing a blue coat, a Russian wool cap, furry boots, corduroys a green and brown tweed jacket with a blue vest underneath, a blue scarf with white polka dots. After spending about an hour or two in his presences, I feel that he is gentle, magnanimous, wise, sharp-minded, with a touch of naivete (similar in a way to Andy Warhol and John Cage–that kind of wonder-at-the-world quality and generosity that is naive, yet in a sophisticated framework).

Nice grouping there. [note to self: work on studied naivete]

It was beautiful to see J and D together…D liked the set very much…J kept insisting he didn’t want his name mentioned since he wanted his role as Merce’s artistic advisor to be ambiguous, but D insisted that J get credit. [The credit on the program for the first performance of the piece in Buffalo reads: “After Marcel Duchamp’s The Large Glass in the Philadelphia Museum of Art, supervised by Jasper Johns.” Even though J’s name is mentioned, the credit still reveals little of the tremendous amount of work J put into the set.]
…We dropped D off at his apartment on 10th Street, after riding through the deserted streets of the SoHo area; D commented on how much he loves this area of New York, especially when it is deserted like it was on Sunday. [pp.67-8]

There’s much more related to this, particularly from Marjorie Perloff’s article on life as art after death, but the image of Duchamp in an empty SoHo is a good stopping point.