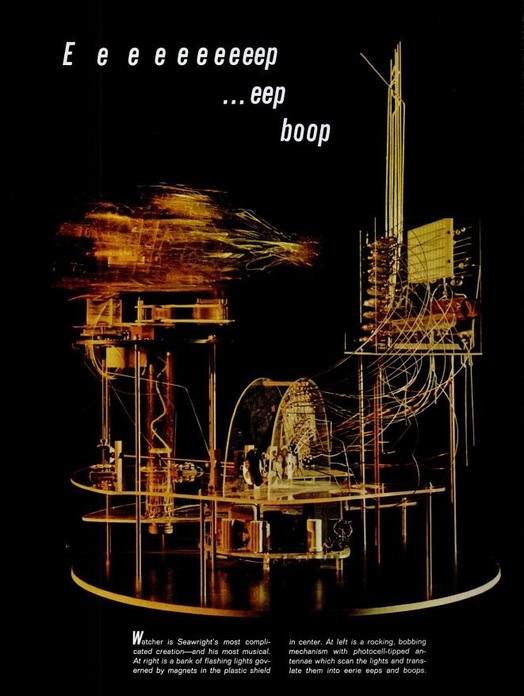 It’s crazy sometimes how long it takes to see what’s right in front of your face. I’ve been thisclose to artist James Seawright’s kinetic and electronic sculptures over the last couple of years, and yet I only really discovered them yesterday.
Seawright, who was for a long time the head of visual arts at Princeton, began making Bauhaus-inspired light and sound performance works with his dancer wife in the early 1960s. Bauhaus in this case meant Laszlo Moholy-Nagy, whose Light Space Modulator has been much discussed around here.
Trained as an engineer, Seawright began taking sculpture classes at the Art Students League in New York, and scored a solo show at Stable Gallery in 1966. Among his awesome work in that show: Watcher (1965) [above, from a 1967 LIFE Magazine spread.]
Like much of Seawright’s work, Watcher is designed to activate and react to the presence of the viewer–or to itself–via photovoltaic sensors. It looks remarkably similar, both formally and functionally, to the Eames Solar Do-Nothing Machine (1958).
After his Stable Gallery show, Seawright was involved in shows at Howard Wise, and was one of a handful of artists–along with Allan Kaprow, Otto Piene and Heinz Mack–to participate in The Medium is The Medium, an early experiment in video art/”tele-Happenings” produced by WGBH in 1969. Which I now must watch again, for the Seawright part.
James Seawright [wikipedia]
seawright.net [the artist’s portfolio site]