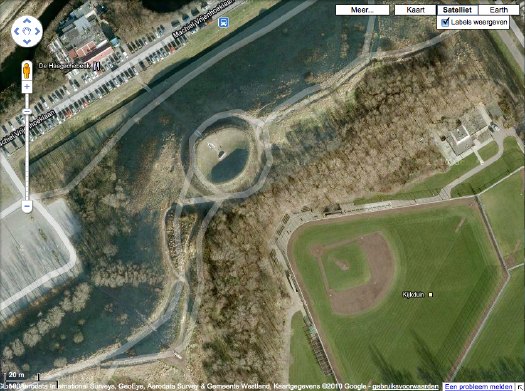 Does an Anglo calling The Hague “Den Haag” sound as obnoxious as one calling Florence “Firenze” or Milan “Milano”? This is not a rhetorical question. I really need to know. 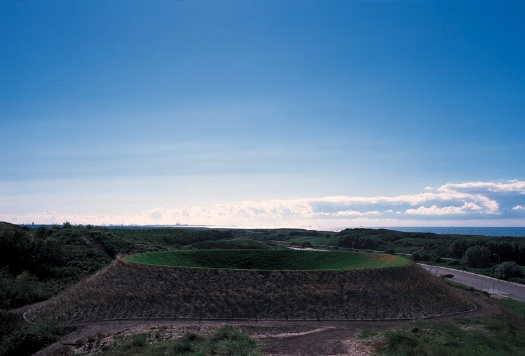 Celestial Vault in 1996, James Turrell, image via: stroom.nl
In 1996, Stroom, the contemporary arts center in Den Haag [!] commissioned a permanent public sculpture from James Turrell. And while Stroom has certainly achieved much since then, it still seems like the most prominent/significant thing they’ve ever done. Celestial Vault was built in Kijkduin, a duney seaside suburb about a 20-min. bus ride from the center of town. It consists of two parts: a contoured, elliptical, crater-shaped earthwork with an inclined viewing platform at the center, and an another platform installed on a higher, adjacent hilltop. The weather and use had taken a toll, and so in 2008, a significant effort to restore Celestial Vault was undertaken. Stroom’s website says the work is open to visit, so I did, only to find warning tape placed across the tunnel entrance to the crater. Obviously, I went in anyway. [On Google Maps, the dune crater looks to be hard up against a restaurant and a baseball diamond, of all things. When you visit it, the topography is such that these both fall completely away.] It seems so online, and it was really apparent in person, that Celestial Vault functions as a kind of experiment or test run for Turrell’s project to reshape Roden Crater. For that reason alone, it seems like it should get more attention than it does. [Is it just me? I follow Turrell’s work, and his 1993 retrospective at ICA Philadelphia is a longtime favorite, but it seems the Roden Crater hype overshadows everything else. I’d never heard of Kijkduin, and frankly stumbled on it by accident on my morning visit to Den Haag.]
Also, it’s actually built. And you can see it without being on a 10,000-year waitlist or whatever Roden Crater’s gonna have. All that said, I confess I couldn’t get Turrell’s vaunted vaulting effect to work. Maybe I didn’t stay still long enough of free my mind or unfocus my eyes or whatever long enough. Maybe I was focusing too much on the rain that was falling on me the entire day. But Turrell [and the Dutch, for that matter] are rather specific about the material qualities of Kijkduin light, and the overcast, rainy lightbox effect IS pretty standard there on the North Sea.
So maybe it was me, and I was wrong to expect something less subtle, a more special-effectsy, fish-eye lens distortion.
Because what you end up with–or what I ended up with, anyway–was a view of the sky where the [shaped] horizon line hovers just barely on the edge of your peripheral vision. The fact that the vaulting worked almost the same way with the actual horizon line, which Turrell used on the hilltop platform, kind of makes you wonder if the whole earthworking effort isn’t more for its own sculptural properties than for facilitating any actual retinal impact.
It’s a question Turrell seems to have been asking himself, by placing these two identical viewing platforms side by side, but in opposite geographic situations. I guess since work really picked up at Roden Crater since Kijkduin was built, Turrell got the answer he was looking for.
Stroom page with info and tons of photos: James Turrell – Celestial Vault, Kijkduin, Den Haag [stroom.nl]
Celestial Vault on Google Maps [google]
My Turrell @ Kijkduin photoset on flickr [flickr]