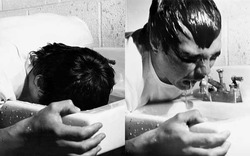 I realize I only tweeted it, and that doesn’t count, so I’ll say it here: Nick Stillman’s essay about Chris Burden’s television-based work at East of Borneo is great stuff:

Velvet Water feels like the culmination of a thread that began with Shoot. That performance actualized the sensationalistic stuff of TV dramas and the nightly news. But aside from its sociopolitical connotations, it contained heroic connotations of Burden as lone survivor. He was very much the performance’s sole subject. Velvet Water retains the vivid political suggestiveness that spikes many of Burden’s best performances. His auto-torture is evocatively similar to how the French police torture the Algerian sympathizer Bruno Forestier in Godard’s Le Petit Soldat (1963), not to mention any number of modern waterboarding videos, but I would argue that the audience–not Burden–was the unwitting subject of the performance. Burden had by this point established a reputation for being a careful, responsible coordinator of his own performances. He must have known that nobody would interrupt him. But he was also clearly choking, and was probably close enough to the spectators that his gasps were audible not only from the television monitor but also in real time, from the adjacent room. Unlike in Do You Believe in Television, where his physical presence was only implied, those present at Velvet Water knew he was right there with them. They were set up as examples of conditioned passivity in the presence of a television set. As Robert Horvitz wrote of the work, in Artforum in 1976, “The electronic link between him and the audience tacitly implicated them in this ordeal, even as it seemed to distance them sensually.” Burden–onscreen and thus invincible–was demonstrating television’s force field of inaction.

Do You Believe in Television? Chris Burden and TV [eastofborneo.org]
Previous Burden coverage on greg.org: the TV ad, and how we can all put ads on TV now, too; the B-Car; remaking Beam Drop.