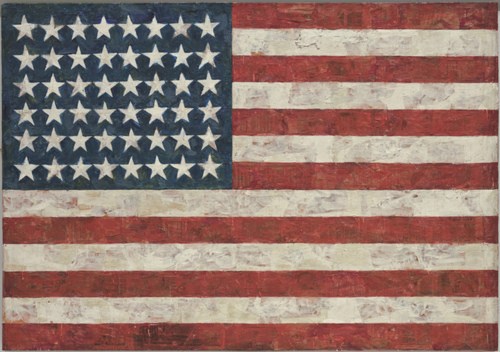 Flag, 1954-55, via moma
The creation myth for Jasper Johns’ Flag is well-known, and well-told. Like Leo Castelli’s story of discovering Johns’ groundbreaking oeuvre, fully formed, while he and Rauschenberg were raiding the icebox, and how Johns’ first show in 1958 got on magazine covers, sold out to MoMA, destroyed Abstract Expressionism and ushered in Pop Art. MoMA’s wall text for Flag [which Alfred H. Barr had Philip Johnson purchase from that show] begins:

“One night I dreamed that I painted a large American flag,” Johns said, “and the next morning I got up and I went out and bought the materials to begin it.”

It came in a dream. It’s a protean story, quintessentially American, slightly romantic, and beyond the reach of anyone but [Freudians, Jungians, and] the artist himself. And that’s the key: because unfalsifiable is not the same thing as definitive, or even true.
In the opening of her 1975 dissertation, published in 1985 as Jasper Johns’ Paintings and Sculptures, 1954-1974, Roberta Bernstein takes a researcher’s step back:

When asked about the sources of Flag, 1954-55, Johns answers that he dreamt one night of painting a large American flag and then proceeded to do so. He has said this several times and will offer no other explanation for the appearance of this remarkable painting.

In the footnotes, Bernstein cites Alan R. Solomon’s catalogue for Johns’ 1964 Jewish Museum show, as well as several personal retellings.
But check out this transcript of Solomon interviewing Johns in 1966 for National Educational Television’s USA Artists Series. Then tell me if it doesn’t sound like there could be another story–or several–for the origin of the flags?

Solomon has been asking Johns about the “programmatic,” “linear quality” of his work:

AS: This comes out in a way, you know, somebody says, there’s this first flag, what a fantastic thing to do. Take a stance; paint a flag instead of an abstract expressionist picture or something. The story about how you painted the flag was sort of peculiar in that respect. Will you tell that story? You want to?
JJ: Which story? Which one do you know?
AS: The one you tell all the time about how you painted the first flag…
JJ: You mean that I, that I dreamed it?
AS: Yeh…
JJ: That’s all I know to that story, that one night I dreamed I painted a flag and I got up and I painted a flag. Is that what you mean, or… have I said more than that?
AS: That’s what I’m getting at. Tell that again, will you. In the sense that I painted a flag and what did it mean…
CUT
Take 7
AS: Would you do that thing that I asked you about. I made the point that, talking about how the work seems to be systematic but isn’t… and the story about the flag sort of illustrates that. Would you talk about that?
JJ: The flag thing?
AS: The whole question about the work isn’t [inaudible] and things like intuition… And the story of the very first one is a good example of that kind of thing.
JJ: I don’t know how to begin…
AS: Why don’t you say my work isn’t programmatic or systematic…
JJ: To quote Alan Solomon… [laugh] … Well, my work isn’t programmatic intellectually; that I have no particular idea about what form it should take. I do whatever occurs to me to do. The first flag painting I did came in the Fifties when I was trying to become a painter, and I had been working in various…styles, I guess. Nothing seeming to mean much to me, except that one made a picture, there it was. And I one night dreamed that I had painted a flag of the United States of America and I got up the next morning and went out and bought materials and began to paint this flag. That’s the way the first, the first painting that’s generally known was done.

“Which story? Which one do you know?” “Have I said more than that?” “The first painting that’s generally known.”
So isn’t there at least the possibility that there are other stories about the genesis of Johns’ Flag to be (not) told? And that MoMA’s Flag may not be the first flag, but just the first that was generally known? Because it seems that that is exactly what Johns is (not) saying.
Johns’ flag dream story is so alluring–it’s an archetype of the invention process, or a cliche–and subjective, so grounded in the artist’s psyche and experience, that it is generally considered definitive. Which I imagine suits Johns just fine. Friends like Rachel Rosenthal have said that Johns was very interested in his dreams and would write poems about them. But the dream story also has the almost magical power to end a line of inquiry about his past that Johns is not that interested in retelling his whole life. [“Tell us about that time you painted that flag and changed the world!”]
This is probably as good a time as any to point out that the 1954-5 date of Flag, the “large American flag” and the “first painting that’s generally known,” is contested, or in flux. Bernstein notes that MoMA used to say it was 1954, until Michael Crichton’s Whitney catalogue came out with the date 1955. Johns clarified [sic] by stating he’d begun the painting in 1954, and finished it in 1955. And reworked it after it was damaged in his studio in 1956, where it hung until his Castelli show in 1958.
Meanwhile, we know when the little flag painting in Rauschenberg’s Short Circuit was finished, because it went on view, uncredited, at the Stable Gallery in April 1955. And Solomon knew about it, because he showed Short Circuit at Cornell’s Art Museum in 1958, just weeks before Johns’ Castelli opening. So maybe that’s what Johns was alluding to when he asked Solomon, “Which story?”
A little earlier in the USA Artist Series interview, Solomon asks Johns about his influences. In fact, it’s the previous spot where they stopped the camera mid-question:

AS: What were your strongest influences…
JJ. In my work?
AS: Yes…
JJ: wel, you can never describe all of them, but… Strongest influence is probably the work of Bob Rauschenberg. My, in some obscure way, my…
CUT
Take 6
JJ: You asked what influenced me and I said that it’s very difficult to describe all of the influences on anybody. It’s very difficult to recognize them. But people whose work that i know of that has has influenced me are Rauschenberg,
AS: Would you talk about how…
JJ: Oh, I can’t…we,, I can, how? Well, I worked very closely with Bob for a number of years with immediate communication of ideas. I don’t, I don’t know what…how to describe it. It’s embodied in my work, and in his work probably, during a certain period of time.