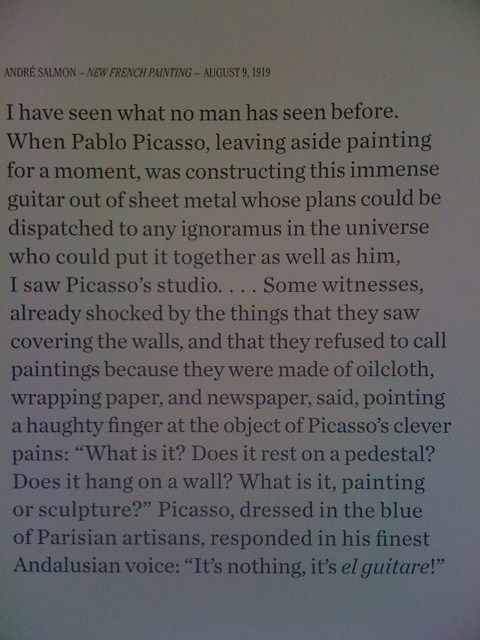 Wall Text from MoMA’s Picasso Guitars show, via @bryanthepainter
I’ve been loving Bryan’s tweets of the various pullquotes in MoMA’s incredible Picasso Guitars show, but none more than this one from Andre Salmon in 1919, where Picasso apparently invented and ignored the kind of instruction-based art that Moholy Nagy’s Telephone Paintings–and Judd’s outsourced fabrications–would later become famous for.
Here’s the full quote:

I have seen what no man has seen before. When Pablo Picasso, leaving aside painting for a moment, was constructing this immense guitar out of sheet metal whose plans could be dispatched to any ignoramus in the universe who could put it together as well as him, I saw PIcasso’s studio. [It was] more chimerical than Faust’s laboratory. This studio, which certain people may claim contained no work of art in the old sense, was furnished with the newest of objects. All the discernible forms surrounding me appeared absolutely new. I had never seen such new things before. [Before that] I did not know what a new subject could be.