A couple of weeks ago, while stopping by the symposium attached to the National Portrait Gallery’s “Hide/Seek” exhibition, I saw a huge, intriguing Robert Rauschenberg work, Visual Autobiography, in the lobby of the Patent Building auditorium. 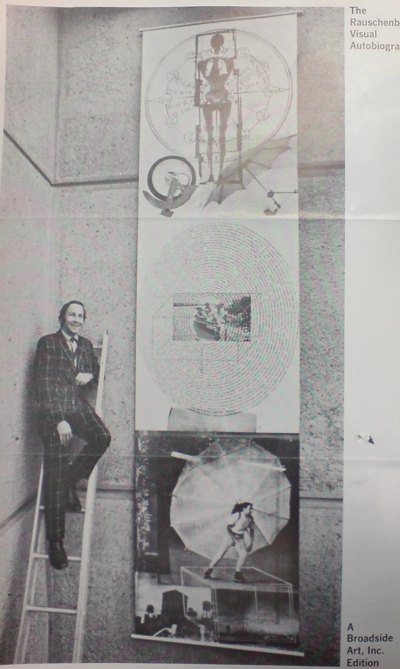 I noticed it immediately because, hello, there was Bob rollerskating with the parachute/umbrella contraption on his back, just like he’d done at the Pop Art Festival in Washington in 1963.
But I’d also recognized the project from mentions in the various Rauschenberg-related archives I’ve been diving into lately; Visual Autobiography was made in 1968 by Broadside Art, Inc., a company the artist co-founded with Marian Javits [wife of Sen. Jacob Javits] to bring big, billboard-sized print technology into the service of artists. 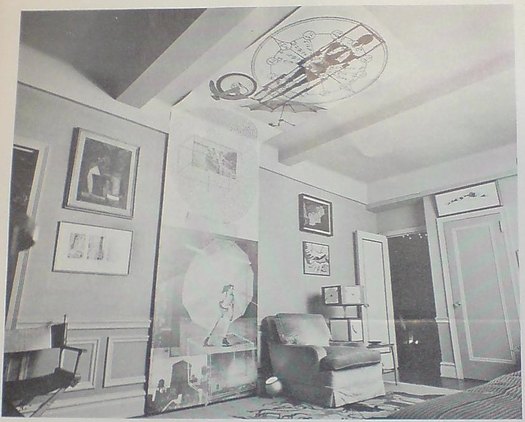 The brochure for Visual Autobiography, which consists of three 4×5′ offset lithographs, shows them installed in various, improbable ways that might have pointed out the limitations of the market: vertically, with Bob, dressed like The Music Man, standing next to them on a ladder; vertically, in a pre-war apartment, where they obviously don’t fit, crawling up the wall and onto the ceiing; and horizontally, likely the only way they’d ever make it out of the tube.
The prints were published in a signed edition of 2000 [!] for just $150/set, $50 more for canvas backing “so it can be hung just as it was at the Whitney Museum,” and sold via direct mail by Rand McNally. [Even today, they provide a lot of Rauschenberg bang for your buck; a full set sold at Christie’s last December for just $5,000.]

Anyway, though it’s called Visual, the center panel consists of a textual bio of the artist, spiraling out from a family snapshot. To read it through requires an odd/amusing bobbing and swaying that must have pleased Bob the Dancer. But right in the center, top of the circle, as easy to read as it’s gonna get, it says, “Jasper Johns lived in the same building and had just painted his first flag.”
UPDATE: The Broadside Art venture’s debut at the Whitney, which is the ladder photo above, was covered in the New York Times; Hilton Kramer hated it. He also predicted that the market-baiting stunt would succeed wildly. As in so many other things, though, Kramer was mistaken. If Broadside ever did another edition, I can’t find it. And Mrs Javits still had copies of the print to give away in 1977, almost a decade later. For all that, though, it turns out Milton Glaser and Clay Felker were also partners in the company. So much light, so little heat.
Here’s a detailed writeup of Autobiography from a 2009 exhibition at Kean University [kean.edu]