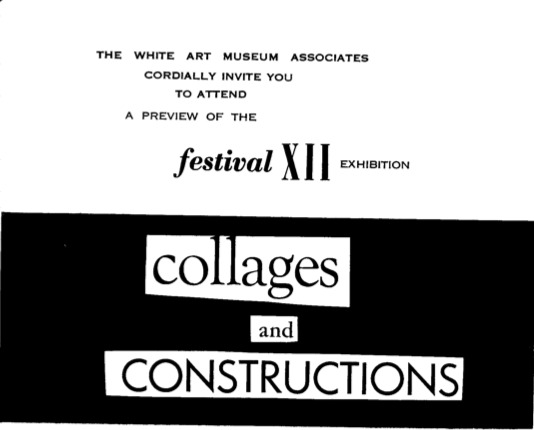 I think Robert Rauschenberg’s Short Circuit was exhibited only twice in its original state: once in the Spring of 1955, in the Stable Gallery annual exhibition for which it was created, and once at the White Art Museum at Cornell University, in 1958.
So far, I haven’t found a mention of the title, Short Circuit before at least 1967, when Rauschenberg exhibited the combine [with the doors nailed shut, to hide the space where the Johns Flag had been, but also hiding his ex-wife Susan Weil’s painting in the process] in a Finch College Museum traveling exhibition.
As mentioned here, Rauschenberg’s earliest registry [which is in the Castelli Gallery archives at the Smithsonian’s Archives of American Art] has the work listed as Construction with Jasper Johns Flag. Which would be an unusual title for the work to be shown with at Stable Gallery, where the whole point was for Bob to smuggle in works by Weil and Ray Johnson as well as Johns.
But thanks to the help of Liz Emrich, curatorial assistant at Cornell’s Johnson Museum, we now know more about the 1958 exhibition, which was curated by Alan Solomon. And though there’s no works list, the list of participating artists makes me wonder if this combine was exhibited as a collaboration, or as a joint/hybrid work.
The show was titled “Collages and Constructions,” and it ran as part of the Festival of Contemporary Arts. Paul Schimmel’s Combines catalogue lists the dates for the show as running from March 13 to May 20th, but it seems that information is from the artist’s registry, and probably pertains to loans of the work. The press release says it ran from April 10 to May 6, 1958. But yet there’s also an invite to hear Rauschenberg speak on April 8, fresh off his Castelli debut. So maybe the show was open sooner.
Anyway, Short Circuit, or Construction with Jasper Johns Flag, as the artist called it, was one of at least three Rauschenbergs in Solomon’s show. According to Schimmel’s Combines, the other two were Gloria and Small Rebus, [both 1956].
The show also included works by: Alberto Burri, Joseph Cornell, Jean Follett, Sue Fuller, Ilse Getz, Robert Goodnough, Grace Hartigan, John Hultberg, Jasper Johns, Allan Kaprow, Alfred Leslie, Corrado Marca-Relli, Anne Ryan, Richard Stankiewicz, “and others.” The press release mentions everyone but Getz and Follett. No word on who those “others” might have been.
I was surprised to find Solomon left his own 1958 show out of Rauschenberg’s exhibition history in his 1963 catalogue. I was not as surprised, though, to see the show not mentioned at all in MoMA’s otherwise definitive-seeming exhibition history for Johns. 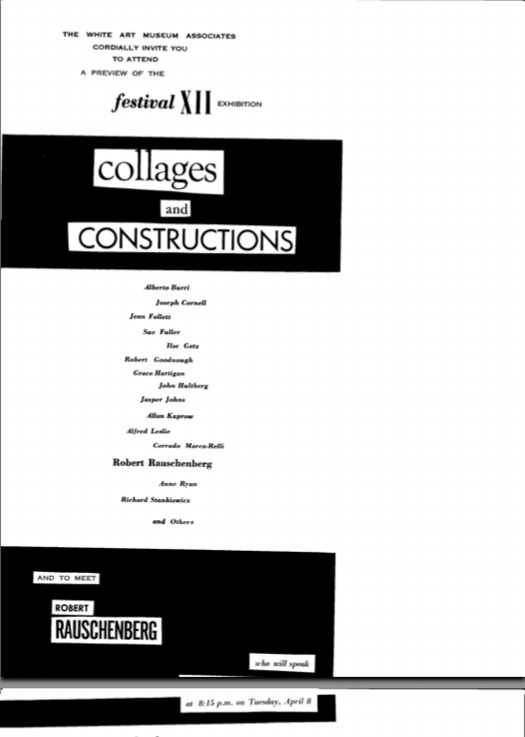