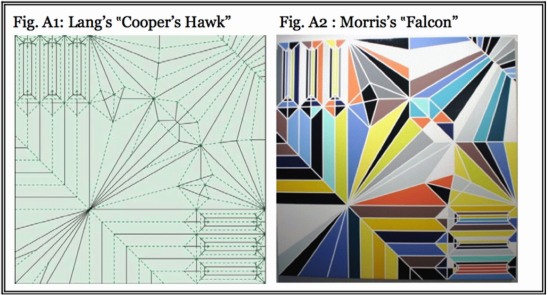 Oh boy, here’ we go again. As @BDPNT, @joygarnett, @robertpearre, @shelawterry, and @Copycense tweeted, “Welcome to Cariou’s world.”
A leading origami artist, Dr. Robert Lang, has filed suit along with several other designers, charging Sarah Morris with copyright infringement for making paintings and prints which use particular crease pattern diagrams without permission or credit.
At issue, just as in Patrick Cariou’s complaint against Richard Prince, is the legal status of Morris’s works, and whether they are derivative, which is infringing, or transformative, which is protected under fair use exemption.
Lang has filed his suit in California, and for some reason a lawyer may be able to explain to me, a great deal of his complaint focuses on the applicability of California as a venue for hearing the case. [The filings, including a sheaf of exhibits, are available for download at Lang’s attorneys’ website. They’re very well-produced, but right now it’s too early to say whether I’d turn them into a book.]
Since I have been exactly 100% [0 for 1] wrong in my predictions for the outcome of such transformative use trials, I’m wary to go too deeply into the facts of this case yet. I will say, though, that basically every difference I see between Morris’s appropriation and practice and Prince’s only intensifies my belief that Morris is and should be in the clear, and that these kinds of lawsuits are a nuisance and a threat. Morris is not an outlier. As an artist she’s operating at the center of the art world, not its margins; her practice and method are widely known, critiqued, supported, and emulated. Within the art world.
She’s also a couple of orders of magnitude less commercially successful, price-wise, than Prince or Koons. As such, she’s more vulnerable than they are, I think, to exactly the kinds of debilitating or chilling effects an expensive, protracted legal fight would entail, especially one fought at an extreme distance. [Morris is based in NYC and London.] Because the stakes for her are non-trivial, they are also more relevant to more artists whose practice includes–I can’t even say appropriation, because I don’t even see Morris’s work within that context. But it’ll be what it’ll be, I guess.
[UPDATE: oh-ho, I may be wrong about this; a couple of people have emailed to point out that Morris is an alumna of Koons’s studio, so this may be exactly the context in which to consider her work. It makes sense, considering the number of people I’ve met who turn out to have worked for Morris at some point. Time to make the donuts.]
Two things, no, three, that stand out, though:
1) These side-by-side exhibits that lawyers for both Patrick Cariou and Lang produced are seductive and deceptive, and they tend to obscure or minimize otherwise potentially important aspects of transformative use.
Lang uses these exhibits to argue that Morris has done nothing but “colorize” [his term] his copyrighted crease pattern. In fact, she has made several substantive changes to its appearance, content, scale, and materials, as well as to its meaning, utility, and context. A crease pattern is not just the geometric form; each type of line–dotted, dashed, or solid–indicates the direction of a fold, and it a crucial, even fundamental element–for making origami. Morris removes all this functional information, a non-trivial transformation.
Another misleading element of these side-by-side comparisons is size. Even if we assume Lang uses the biggest piece of paper mentioned on his site, 20-inch squares, his pattern is still 95% smaller than Morris’s huge painted canvases. A more accurate side-by-side image might look like this: 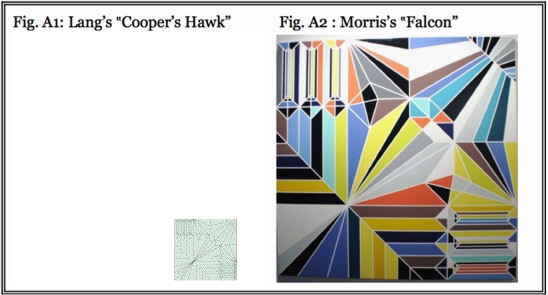 2) Lang’s filing makes the bold but utterly ridiculous claim that “Morris’s actions have created competition for Plaintiffs by occupying the market for painted versions of their copyrighted artworks.” No such market exists, and I’d argue that Morris’s paintings have created one. If people pay $100,000 or more for Morris’s paintings, it’s not because they look like Robert Lang diagrams; it’s because they look like Sarah Morris paintings. Her realized gain attributable to the origami IP itself is incremental at best.
3) Unlike Prince, who did not profess any particular critical interest in Cariou’s Rasta photos, Morris has publicly discussed and presented her origami paintings as commentary both on origami and its history and its specific meanings and contexts, but also on its contemporary connection to science and systems. Lang the origami expert is famous in a way that Cariou the photographer precisely is not. As such Lang’s work could present a larger, more natural target for someone wishing to make critical new work about origami.
The kicker for all this, is that I’m kind of an origami nerd myself. That my greatest origami accomplsihment was winning 2nd prize and $10 at the Utah County Fair one summer when we were visitng my grandparents’ house as a kid pretty much says it all. [I made my origami peacock out of printed wrapping paper.] But I still do it pretty regularly, and I’d say I have an above-average sympathy for these origami masters who feel they’ve been treated unfairly. I still think they’re wrong as hell, though, and that this case is a dangerously unproductive nuisance.
UPDATE: And speaking of my fellow nerds, look who else has spent Friday night picking apart the latest artist copyright infringement case? Joy Garnett has some solid analysis and some biting commentary. I’ll only add that between their blog headline and their PR-chasing email to Newsgrist, the origami folks’ lawyers are really angling aggressively to publicize their claim against Morris.
Lang Origami [langorigami]
Oy: These Origami Artists Won’t Fold [bayoaklaw.com]