“THE WITNESS: This could be a cool book.”
– Richard Prince Deposition Transcript, p. 328
Dude, Richard Prince just blurbed my book.
Between the lawyers on both sides of Cariou vs. Prince et al, about 275 pages of the transcript of Richard Prince’s 7-hour deposition had been made public as footnotes to various briefs and memos, but there were 101 pages left out.
In the weeks since I compiled the excerpts and exhibits into a book, I’ve been trying to track down the complete transcript. Now I have it, and you can too. After trying multiple sources for obtaining it, a sympathetic party close to the case pointed me to an apparently inadvertent, unmarked exhibit appended to a late court filing, which included the entire 378-page transcript instead of the customary snippets. 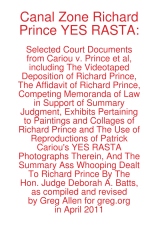 And so I have revised Canal Zone Richard Prince YES RASTA to includ the entire interview, in order, with a handy timestamped topical index, even, and with some additional rounds of legal memos, that give a fuller sense of the give and take that led up to Judge Batts’ royal smackdown of Prince’s transformative use claims.
In addition, to accommodate wholesale requests, I’ve switched printers, so the new, revised edition has slightly smaller page facsimiles, but it is also printed on higher-grade paper. It looks pretty slick.
Because of the additional quality and page count bumps, the cost went up a bit, to $17.99, but it’s still a pretty sweet deal, I think. You can buy Canal Zone Richard Prince YES RASTA directly from Createspace.com, an Amazon print-on-demand subsidiary, of if you like, you can also order it from Amazon. If you’re dying to see it in person first, both Printed Matter and Specific Object have greg.org-stamped copies available.
For folks who have already purchased the book, either in print or electronic format, don’t worry, I’ve got you covered. I made an Appendix which contains all the missing transcript pages, and I’ve been mailing out printed and PDF copies to people who’ve contacted me. Whenever the printed copies run out, I’ll be happy to keep the appendix available via PDF.
Because it really does have some interesting stuff in it, like the quote at the top of the page, which was Prince’s reaction to the exhibit showing the side-by-side comparisons of the Patrick Cariou’s YES RASTA images and the Prince Canal Zone paintings they ended up in. [Obviously, that exhibit is included in the book.]
Now that the whole deposition story can be told, I think I’ll go through and pull out some highlights to share here: some great exchanges, useful insights, or straight-up WTF moments. If you have any favorites, definitely pass them along. And enjoy! The damages hearing is scheduled for May 6, tomorrow!
Buy Canal Zone Richard Prince YES RASTA: Selected Court Documents from Cariou v. Prince et al from Createspace or Amazon.
The book is also available at Printed Matter and Specific Object, both in New York and online.