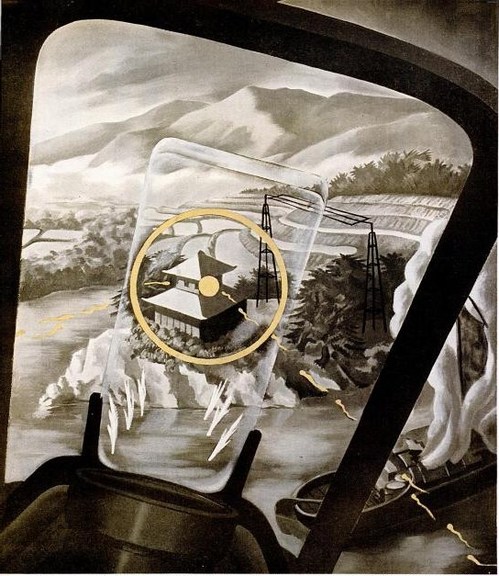 Another inadvertent Google find, also from the World War II School of propaganda art. In anticipation for an invasion of Japan, 1945 LIFE Magazine wanted to give the general public a fighter pilot’s-eye view of ground attacks.

Perhaps because actual combat photos were deemed too sensitive or otherwise unsuitable, the magazine asked artist Henry Billings to create a series of strafing attack paintings.
Noted before the war for his machine age-themed murals, Billings’ characteristically mild-mannered modernist/precisionist landscape style goes uncommonly well with the scenes of destruction from the air. 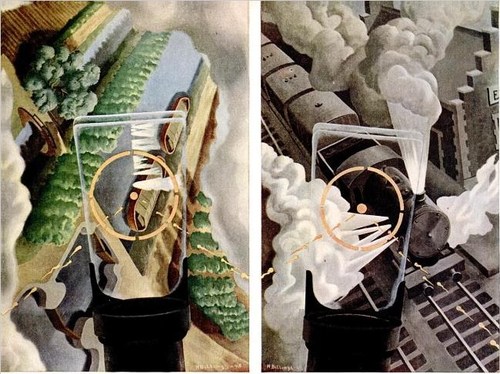 But the most prominent thing in the images, no matter the sometimes dizzying orientation of the earth itself, is the central fixity of the P51 Mustang’s reflective sight. A technological advance that only rolled out during the war itself, the gunsight’s half-mirrored glass panel meant the pilot could maintain his fix on his target without lining his eyes up directly with the line of fire. It’s an interesting perceptual concept to try to capture in a traditional landscape painting.
I don’t know what happened to Billings’ art career, but his posthumous market is pretty weak, with paintings and drawings selling in the low hundreds of dollars. [Oh, with the exception of this nice precisionist boatyard panel. Wow.] No word on the fate of the strafing paintings, though.
Ground Strafing – LIFE June 30, 1945 [google/life]