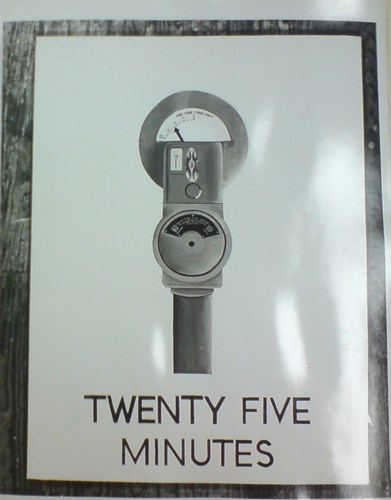 So, my mind is kind of blowing because Vern Blosum is in a show opening tomorrow.
Blosum’s work was included in some of the very first exhibitions of Pop Art in the early 1960s. His deadpan paintings of objects from New York City life: parking meters ticking down in five minute increments, like proto-serial art, were acquired by some of the most influential collectors of the day. Thanks to an emerging artist fund set up by Larry Aldrich, MoMA acquired a large Vern Blosum painting in 1963, which was regularly on view for many years.
And then he disappeared. No work, no shows, no nothing. I came across Verne Blossum [not sic] almost two years ago now, when his work Violation ran next to Warhol’s in the Washington Post’s March 1963 preview of Alice Denney’s pioneering show, “The Popular Image.”
Then I found the MoMA painting, Time Expired, and started digging.
I’m going to cut to the chase here and reveal that I have found Vern Blosum. I have met Vern Blosum. And I have seen Vern Blosum’s work in person. And his story is utterly fascinating. As you may have intuited from the varied spellings as early as 1963, Blosum’s own identity has been as much in flux as the history of Pop Art itself once was.
It’s taken a while, and a fair amount of research, and negotiating, and puzzling, but I think it’s alright to go ahead and tell Blosum’s story now. Or at least to tell my story with Blosum, because the artist is still alive and working, and should have the prerogative of defining his own body of work.
Meanwhile, the immediate trigger for this post is an intriguing show that opens in Los Angeles tomorrow, timed to the Pacific Standard Time events. Cardwell Jimmerson in Culver City has put together “Sub-Pop,” a survey of early, “non-famous” Pop artists. These are folks who featured prominently in the first draft of Pop’s history, and who were included in Walter Hopps’ and John Coplans’ formative Pop exhibitions.
In “Sub-Pop,” according to the gallery’s statement,

the smug success sotry of Pop Art is replaced by a somewhat more poignant “failure” story, that loaded word defined in the reductive sense bequeathed us by Warhol as simply, “the failure to become famous.”

While researching their show, the gallerists contacted me about Blosum [his West Coast spelling], and we were able to track down the Blosum painting that John Coplans had shown in “Pop Art USA,” which he curated in 1963 at the Oakland Museum.
To get my own Blosum saga caught up, I’ll start tonight with a post about MoMA’s painting. And then next week, I guess, I’ll tell about tracking down Blosum, and meeting him, and seeing his work. Because I think he’s more than just an amusing story, or an overlooked artist; he and his work occupy a remarkable moment–and an important space, however tiny it may seem right now–in the history of contemporary art.