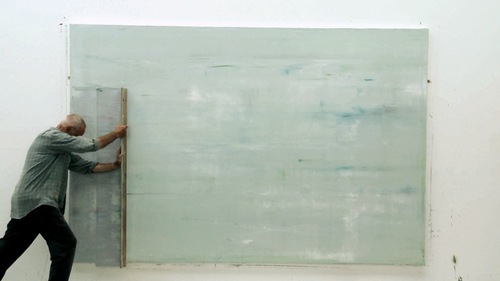 Gotta get a piece of that Gerhard Richter Painting. After completing a documentary about the artist’s Cologne Cathedral stained glass windows in 2007, filmmaker Corinna Belz began working on another project, filming Richter at work in his studio. She waited a year and a half for the artist to begin a new series of abstract paintings, and then she pretty much filmed the whole process.

It’s kind of crazy how jazzed I am after just watching the trailer. Those squeegees are so huge. And they’re clear. And he wields them by hand. Some of this we [I] knew, but it’s still kind of riveting to watch. Belz in an interview:

Books are a better medium to articulate theoretical positions. And the actual act of painting is hard to describe in words: The way Richter mixes primary colours on the canvas, generating such a complex colour system. How layers are built up and submerged, how sculptural they appear on canvas. The most important thing for me in this film was to show something uniquely visual.