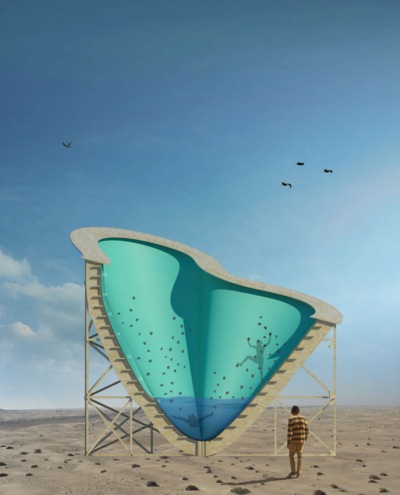 Hoo man, David has an interview with Ball and Nogue about their High Desert Test Site project which is called Yucca Crater, and which appears to be an earthwork, but is man-made. It’s a tricked out plywood recreational structure half-embedded in the desert which looks a bit like a half-pipe, an abandoned pool, and one of those deadly carnivorous pitcher plants. Because it’ll have a climbing wall and a pool in it, in which some random tripping art student will, I’m afraid, drown one day. 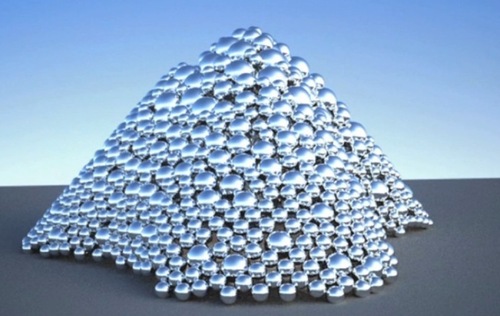 But that’s not important now. Yucca Crater is made from the leftover formwork from another Ball-Nogues project, Talus Dome, a public art commission for the Edmonton Arts Council. [Quesnell Bridge. Holy smokes, people, a mountain dome of giant mirrored spheres.
But why, you may ask, is the form available to bury in the desert if the Telus Dome is not actually complete yet? This is not some CAD/CAM hit ENTER and 3-D print operation. They actually pack those balls into that thing to make it. 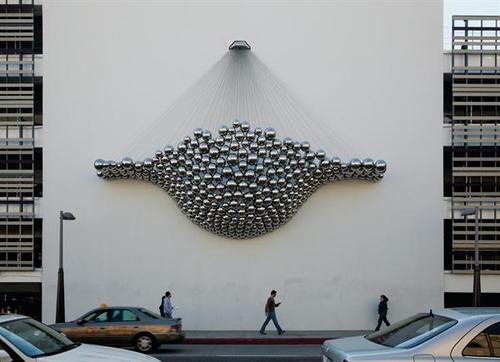 image: Timothy Hursley via arch mag
Like how they made Cradle, Ball-Nogues’ shiny ball 2010 commission for the “updated” facade of what [used to be] Frank Gehry’s Santa Monica Place parking garage. [It’s called Cradle I guess because calling it a bulging “men’s Speedo” or “a big banana hammock” before they finished it might have raised some eyebrows.] 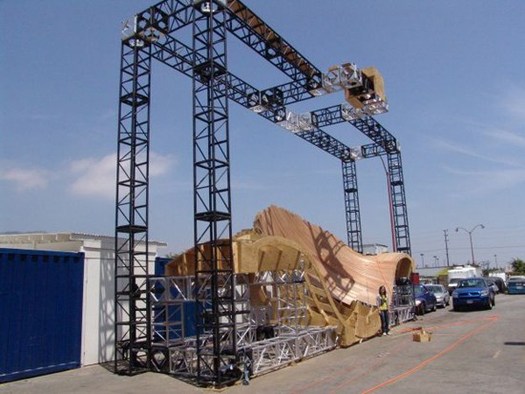 Anyway, who else but Design Boom has a big photo set of the making of Cradle. These balls are just hanging there, each held in place by a steel cable, the specific length of which was determined by rigging the whole thing up in a giant, wooden banana hammock mold. Designboom also shows how the balls themselves were made: they were welded together and blown in China. See how I avoided any innuendo there?
Whatever, I can’t stop staring.