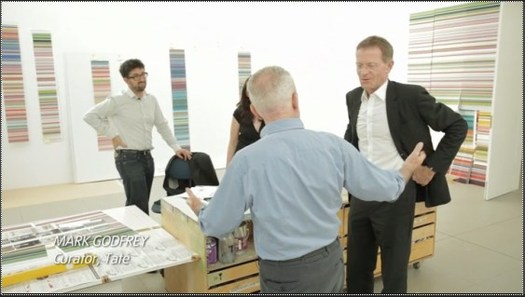 The Tate video of Nic Serota and his team in Gerhard Richter’s studio is nice for many reasons: it includes some squeegee action scenes from Corrina Belz’s Gerhard Richter Painting [which I’m trying to get a copy of; Is there anyone in London who can pick up a DVD for me? Or in the UK anywhere who can accept a shipment and forward it onto me?] 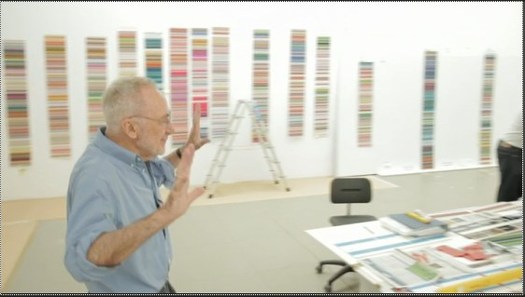 For filming, they moved the model of Tate Modern’s galleries into the main studio room, which was full of strips of the Strips series [and hey-ho, a bent strip too, what’s up with that?] 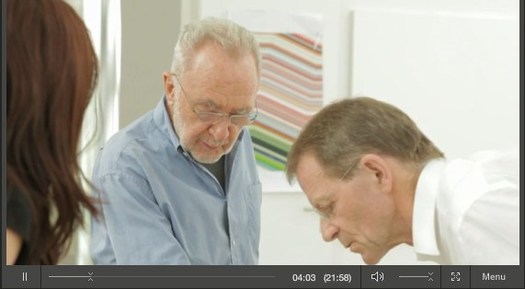 But the most interesting thing to me, anyway, is this exchange from Serota’s interview of Richter, about leaving East Germany:

GR: We had also the possibility to go every a year at least twice to West Berlin, to saw movies and exhibitions. It was the first time I saw the wonderful Family of Man
it was a famous exhibition.
NS: This was the exhibition made by Edward Steichen
GR: Uh-huh, and this was a real shock for me, this show.
NS: Why?
GR: Yeah, so, to see these *pictures,* and I only knew paintings, I was very interested. And they showed so much, and they told so much, these pictures, these photographs. They told so much about modern life. my life.
NS: So was this the moment when you discovered photography? Or the power of photography?
GR: Let’s say the power, yeah, of what photography can do. 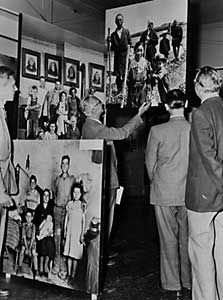 Serota delivers that question with an intensity that makes it feel like a scoop, and I don’t think his reaction is [just] for the camera. I haven’t found any previous mention of Family of Man either by Richter or in relation to his work. Steichen isn’t in the index for the collected writings. There’s no mention of it in Christine Mehring’s study of Early Richter. And though Elger’s bio for the period in question–Family of Man opened 17 September-9 October 1955 at the Hochschule für Bildende Künste–mentions Richter’s trips to West Germany during what was his last year studying mural painting at the Academie in Dresden, there’s no mention of the photo exhibit itself.
As for Richter’s nascent interest in photography, the artist did tell Rob Storr that he received copies of Magnum magazine from an aunt in the West. And Elger notes that his family photo album was “one of the few belongings Richter would take with him when he fled to the West.” But the artist now adds Family of Man to the list of his early photographic influences. It makes me wonder what the show actually showed Richter about photography’s power, and whether the artist went on to study Steichen’s other MoMA photo exhibits, the ones that didn’t travel to Berlin.
Image above: Edward Steichen in the Berlin installation of Family of Man, 1955, via moma.org
Tate Channel | Gerhard Richter (21:58) [tate.org.uk via @aodt]
Previously: The Family of the Family of Man: Steichen, Miller, Rudolph, Stoller