Thanks to Awl for reminding me that not everyone is not talking about Rirkrit Tiravanija’s sexy, blingy objects. I’d found this last week, but it was crashing my browser, and it may do the same to yours, probably because it’s designed for folks who trade up their computers with the same frequency Steve Jobs traded his AMG SL65.
The Financial Times’ luxury lifestyle magazine supplement How To Spend It loves Rirkrit’s work. 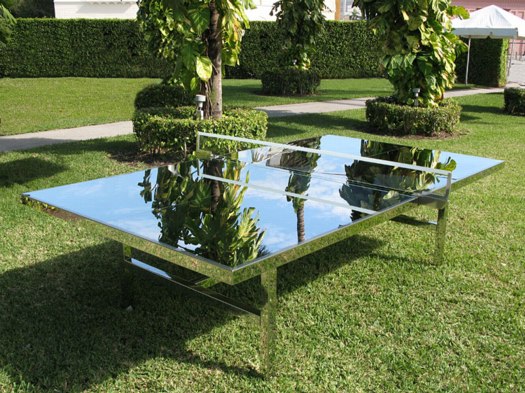 In “Art Works: Spectacular Sculptures – with a purpose,” Helen Chislet delivers servicey with a smile by revealing the “spectacular and tremendous fun” that can result “when artists are asked to design functional outdoor objects.” Objects like Rirkrit’s “ping-pong table of flawless mirror-polished stainless steel in an edition of ten–a piece of perfectly executed workmanship that carries a price tag of $55,000.” [no correction to my original price mention; if you want to pay 10% more that’s your business -ed.] Objects which are still likely to appeal to the FT’s ideal UK-centered international demo, typified by one garden folly maker’s client base as “City workers relocating to the country, but now includes European royalty and “extraordinary people.”
And the Palm Pavilion at Inhotim gets a starring role in “Artward Bound,” Pernilla Holmes’s round-up of far-flung private art parks, which, I love this:

“So much contemporary art is commodified,” says [Doug] Aitken. “A place such as Inhotim works against that. It empowers the artist rather than curating the artist. It’s a phenomenal template for a modern museum.” Unlimited by budget constraints, bureaucracy, timescales and space, such privately owned modern museums are popping up in spectacular, middle-of-dowhere locations around the globe as moneyed art collectros turn the traditional museum model on its head. Each is as unique as the personality of the person who dreamt it up.

Aitken really does have his finger on the pulse of these things.
previously: relational aesthetics for the rich
the gala-as-art movement [vimeo]