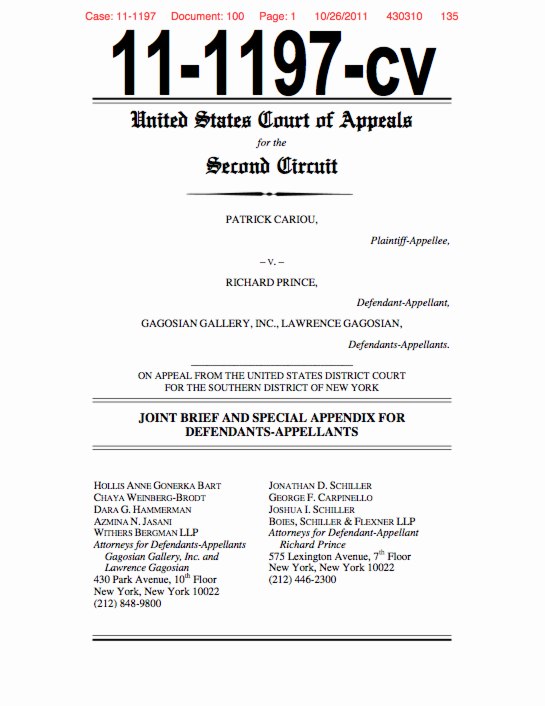 I’ve tweeted on this a bit already, but it’s really worth repeating: Richard Prince’s appeal of the Patrick Cariou copyright infringement decision is a really great read. The brief was filed last week, and I finally got around to reading on Halloween night. I find it makes a very clear and persuasive argument for throwing out Judge Batts’ sweeping ruling, and it’s a nice, not too esoteric discussion of appropriation and fair use as well.
Basically, Prince, his new lawyers, and Larry Gagosian argue that Judge Batts wrongly applied the prevailing legal standards for fair use, especially the most recent, relevant case which had been before the same court, Blanch v. Koons.
I think I’ve written before that Prince’s work, and his first-round defense, relied very heavily on Koons’s winning argument that an artist’s transformations of size, scale, material, and context were sufficient for fair use. But their briefs almost never cited Blanch and did not make that transformative use argument clearly or well. That has changed.
Prince’s lawyers also argue that Batts overreached and erred by finding all 30 of Prince’s Canal Zone works to be infringing, regardless of what, how, or how much of Cariou’s imagery they contained. And that it’s wrong to force Prince to hand over all the artworks to Cariou when the settled precedent of monetary compensation exists.
I think that, at the very least, the court will find that each painting must be evaluated, and that the court will have to decide Prince’s transformative efforts. While I would love to publish such a document, because it would just be the best kind of worlds-colliding art criticism around, I suspect a check will be cut before the judges take out their rulers.
I could rattle on about this all day, but why not just read it yourself? Here is a copy of Prince’s filing, which I’ll host on my Dropbox own site for a while. The 135-page ruling has a lot of very nice, full color illustrations and clocks in at around 7mb.
[OBVIOUS DISCLOSURE ABOUT GREG.ORG AND THE CREATIVE CAPITAL | WARHOL FOUNDATION ARTS WRITERS PROGRAM, WHICH IS COMPLETELY UNRELATED TO THE FOLLOWING PARAGRAPH, HERE.]
And in even more interesting news, Joy Garnett just gave me a heads up that the Warhol Foundation has actually filed an amicus brief in Cariou v. Prince, warning the courts that if Judge Batts’ ruling were to stand, it would put works by other artists in jeopardy, and would cause “such uncertainty in the field as to cause a chilling effect on the creation of new works.” I expect I’ll come back to this after I read it all, but the Foundation’s brief defends Prince’s work as part of a broad, artistic history of appropriation, quoting, and collage. Should be interesting. The Foundation’s 57-pg brief [pdf] is linked directly here.
Previously: the five most ridiculous things about the Richard Prince copyright decision
The Richard Prince decision? You’re soaking in it!
Richard Prince’s Spiritual America
Size Matters?
“THE WITNESS: This could be a cool book.”
“The Movie is called ‘Eden Rock'”