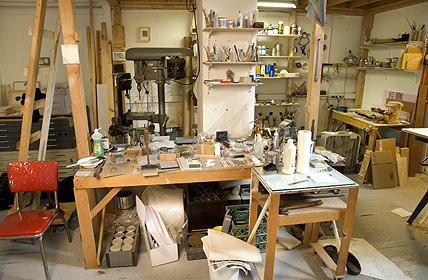 I’m really bummed to have missed The Gifting of Bill Walton’s Studio on December 4th, the extraordinary culmination of the ICA Philadelphia’s memorial recreation/exhibit of the late local master’s crowded workplace.
As ICA blogger/curator Rachel Pastan tells it, the event went of exactly as planned, with people trading memories and stories of Walton, and then choosing a memento from the studio–tools, brushes, scraps, materials, anything but finished sculptures–to take with them.
I guess it’s alright, because I’ve kind of been doing the same thing already, since 1996.
I found Bill Walton’s humble, powerful, minimalist, materialist sculptures when I was attending business school in Philadelphia. When Larry Becker Gallery had his second Walton show during my final semester, I splurged and bought a small piece–small even by Walton’s standards, though bigger than the gold or copper headless nail works he’d embed flush in the wall. 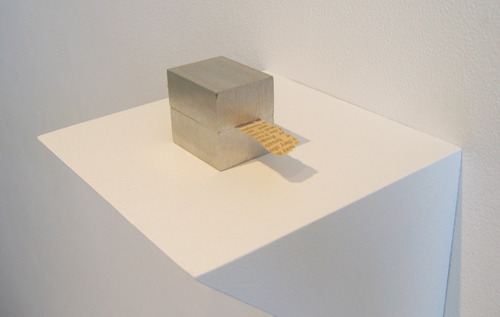 It’s a strip of lead an inch or so wide, carefully folded back and forth on itself into a little stack, almost like a cube. Pinched between one of the folds is a single 10″-inch blade of dried grass. In concept, it’s similar to the aluminum block & newspaper work Walton showed at Patricia Sweetow Gallery in 2005 [above]. [BTW, I love that he didn’t date his works. They exist among themselves, not in a timeline or progression.]
Becker explained that it was common to the streets of Philadelphia, and should I ever need to replace the grass, I could go out and find it. The species of grass is included on the label on the little custom-built archival cardboard case–it’s put away right now, so I can’t look it up–and Walton helpfully included a couple of spares behind a taped sheet of glassine.
Becker had shown the little sculpture on a small, white wall bracket about the size of a CD-case. For a while, I alarmed Becker by telling him how I had placed the sculpture on a cinnabar lacquered netsuke stand I’d found in the basement of my globetrotting landlady’s townhouse.
I was very interested at the time in the way Western modernism and minimalism resonated with Asian and Zen precursors–I was a groupie for John Cage’s Rolywholyover, which was at the Philadelphia Museum in 1995. And then later, when MoMA was choosing the architect for its expansion, I was translating criticism about Yoshio Taniguchi and his architect father Yoshiro Taniguchi, who had worked with Corbusier, designed the awesome mid-century modern Hotel Okura in Tokyo, and who founded Meiji-mura, an architecture preservation park which contains Frank Lloyd Wright’s Imperial Hotel.
But that’s several other stories. When my grass broke and my supply ran out, I began making a point to harvest a blade or two every time I went back to Philadelphia.
I kind of drifted away from a close following of Walton’s work after I left town, but Walton’s sculpture ends up occupying an outsize mental space for me, and it continues to link me to the city where Walton made it–and where I found it during my 2-year sojourn.
The transfiguration of Bill Walton’s studio [icaphila.org]