OK, here are some more details about how the crazy-awesome synthesizer/lightboard came together in Close Encounters of the Third Kind, courtesy of Ray Morton’s 2007 book on the making of the film. 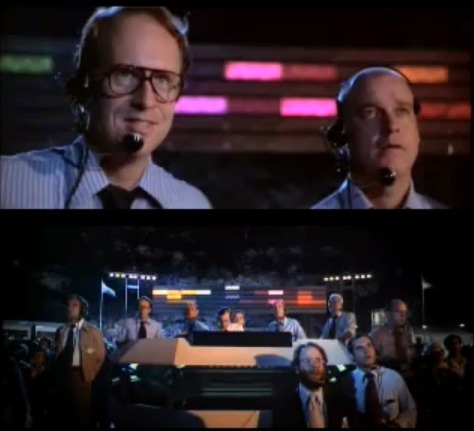 Maybe not surprisingly, it grew and evolved along with the crucial scene, known as the Box Canyon scene. Originally, Spielberg’s idea was to use run&gun documentary style film of humans meeting aliens on a very hastily constructed tent base. [the idea of the Mothership landing in a McDonald’s parking lot was nixed early on]. This grew to a runway, which became a stadium, which became a Box Canyon on the backside of Devil’s Tower.
Except that there was no way they could shoot all that at night outdoors, so they ended up moving the entire production to Mobile, Alabama, where they created the world’s largest soundstage out of a pair of WWII-era dirigible hangars, nearly bankrupting everyone in the process.
And though I mentioned Douglas Trumbull as a possible creator, Morton’s book credits Spielberg and art director Joe Alves [who, as production designer on Jaws, had also created Bruce the shark]

Inspired by Russian composer Alexander Nikolayevich Scriabin (1872-1915), who had theorized that specific musical notes prompted listeners to think of specific colors, Spielberg came up with the idea of connecting the Moog synthesizer to an array of colored lights so that each time a note was played on the Moog, a corresponding color would flash in the array. Alves suggested that the colors appear on a huge video screen but Spielberg wanted something resembling an athletic field scoreboard. Developing this idea, Alves decided to segment the board into several rows of colored rectangular panels. He then needed to find a logical way to relate the colors on the lightboard with the musical notes being played on the synthesizer. He wasn’t quite sure how to do this until he saw a television program that featured Leonard Bernstein talking about composer Arnold Schoenberg (1874-1951).
Schoenberg had devised a method of musical composition that utilized all twelve tones in the chromatic scale. Realizing that there were also twelve colors in a secondary progression on the color wheel, Alves decided to link the tones and the colors (beginning with middle C and yellow), which gave him a row of twelve rectangles running across the board. He then added three more rows on top, consisting of lighter tones and higher octaves, and two more rows on the bottom, consisting of darker tones and lower octaves, for a total of seventy-two rectangles A full-scale version of this color board would be created when the actual set was built.

First off, how hilarious that Alves got the idea of a Schoenbergian twelve-tone scale from Bernstein; Bernstein hated that shit. I’m going to guess that Alves is referring to Bernstein’s notorious Norton Lectures at Harvard in 1973, in which he argued for tonal music as a universal language against Schoenberg’s chromatic system. The lectures titled, The Unanswered Question were aired on PBS.
Previously: Close Encounters Jam Session