You know what I never got around to doing in 2010? Finishing the catalogue of all the designs created for the Alcoa Forecast ad campaign in the late 1950s.
That was the postwar, civilian/consumer-oriented, Glorious Aluminum Future PR campaign that gave birth to the Eames Solar Do-Nothing Toy. Which is by far its greatest claim to fame.
But still, there were other products, prototypes, designs, toys, sculptures, concepts. Like the ones I ran across in April 2010: Eliot Noyes’s design for a carport-like, aluminum & Perspex shelter; satelloon-esque, spherical prototypes for a portable oven by Greta Magnusson Grossman and the Music Sphere, a hi-fi by Lester Beall; and modular prismatic side tables by Isamu Noguchi. Then I found a couple of boring ones, and got distracted. 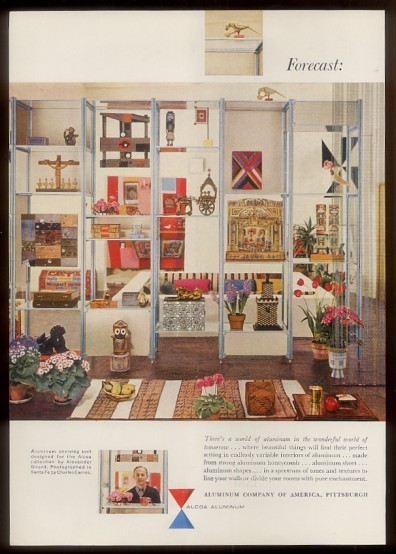 But I just stumbled across this tearsheet on eBay, which is probably from the July 27, 1957 issue of the New Yorker, and which shows a shelving system Alexander Girard designed for the Alcoa Forecast campaign. The photo, shot in Santa Fe, at Girard’s house, was taken by Charles Eames. Which, according to the timeline of John Neuhart, the Eames employee who actually created it, is about when the Solar Do-Nothing Machine was realized. 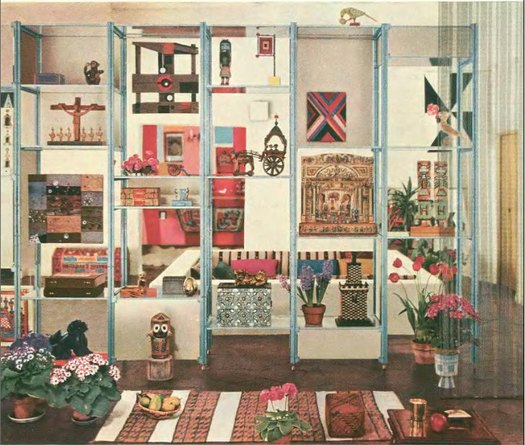 So Girard. Hmm. Overall, of course, awesome. But the shelves themselves? I gotta say, I’m not feeling it. The various panels in milk or smoked glass are fine, but the tubular metal seems off, and the feet are a mess.
The image itself seems to be more successful, or interesting, the way it collapses background and foreground into the shelves, which is funny, since they’re ostensibly meant to divide the space they inhabit, not flatten it. That Four Seasons-looking chain curtain thing on the right is especially odd/cool. And that Mary Heilmann painting top-center is freaking awesome.