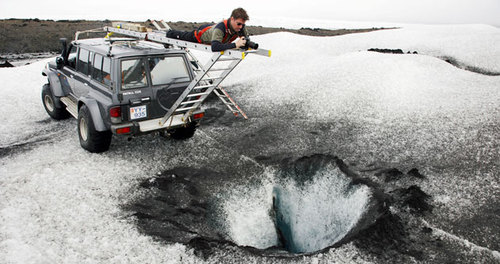 image: JJ Films
The thing is, everybody in Iceland has a monster truck. Or a big ol’ van with balloon tires and a four-foot lift kit. The country only got a paved road in like 1979 or whatever.
But easily the coolest part of Jacob Jørgensen and Henrik Lundø’s 2010 documentary, Space is Process has to be the scenes where Olafur and his crew are traversing the Icelandic moonscape in a convoy of SUVs, climbing mountains, fording rivers, backing up the edge of glacier holes, etc. etc., to gather images for the photo grids and such.
I hope there’s an entire bonus disc of this footage on the DVD.
In his voiceover, Eliasson clears up a question I’ve always meant to ask, and confirmed something I’ve come to think about the photo works. First, the question:
Each grid of a particular natural feature is the subject of its own expedition. Which means he’s hunting them down as a batch, or as he put it, “documenting a little story of a phenomenon.” I’d wondered if this is how he did it, or if he shot and shot and shot, and then sorted and sifted, letting the typologies emerge out of the data.
But there are also photo grids that explicitly document a specific place or time, too; that follow along the course of a river, or a walk. Or the passage of a cloud overhead. So typology and biography–autobiography, in a way–are very close together. In System is Process, Eliasson does exclude the idea that his photography is somehow about [sic] getting in touch with his roots or his homeland or whatever.
But his deployment of story and narrative fits with how I’ve come to read the photographic works generally, as markers, documents, of the artist’s encounter with and passage through this particular landscape. Which happens to be where he’s from.
All this insight is then crowded out by the image of a giant, white Land Rover/armored car with–holy crap, is that a glass geodesic dome turret on top? I am sorry, Donald Judd’s Land Rover, but you’re gonna have to park on the street now. Because this spot is reserved.

Aha, there it is, tiny, in the extended trailer for the film.