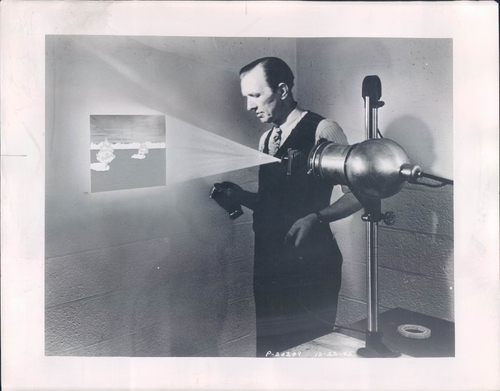 I hate when I lose the context of something, it’s like I”m no better than a tumblr around here, minus even the traffic.
Anyway, this image of The Latest Photo Mural Equipment is from somewhere and some time in the past. The image of the back of this photo had a caption scrawled on it, “Photography Equipment
An emulsion, melted,
brushed on wall,
latest in murals.”
Also a note that it was to run across two columns. So it is from a magazine. In any case, the idea seems to have been to paint the emulsion, then project an enlargement of a negative on it, exposing and developing it right on a wall surface. Which seems amazing, and also right tight with my theory [sic] about a connection between photomurals and large-scale, postwar painting.
Oh, there’s a datestamp: Jan. 29, 1946.