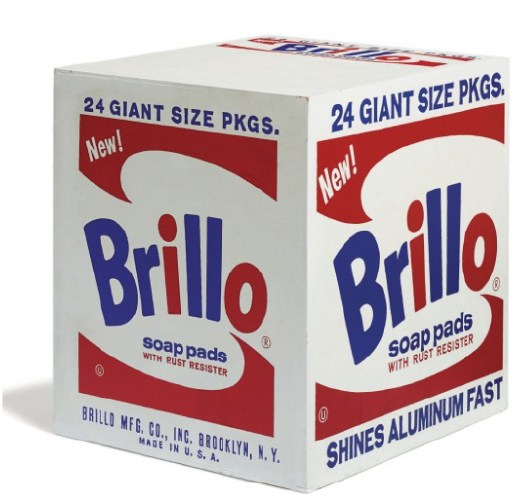 Will you look at that, another one of Irving Blum’s Pasadena-style Brillo Boxes is coming up for auction in the morning at Christie’s, with an estimate of $400-600,000. [The last Blum Pasadena Brillo box I wrote about sold for $782,000 in 2010.]
These Blum boxes are always/both listed as “acquired from the artist,” but they are actually part of an extra batch of at least 16 boxes which artist/curator/editor John Coplans had made as extras for the 100 boxes Warhol authorized for Coplans’ 1970 retrospective at the Pasadena Museum. The actual 100 were donated to the museum, but the overages were dispersed among Warhol’s friends, curators, dealers, and collectors in Los Angeles.
Oddly, the pair Coplans got from Warhol, which he donated to Oberlin College, are classified as “reserve boxes” for the exhibition; their somehow lesser status means they have never been published or exhibited outside the college.
Meanwhile, other of the 16+ which go through dealer or collectors’ hands are classified as regular, ol’ cash-n-carry Brillo Boxes.
Still no word on the whereabouts of the 10 to 33 Kellogg’s Corn Flakes boxes that went missing from LACMA, from the 100 Warhol authorized and donated to that museum at the same time.