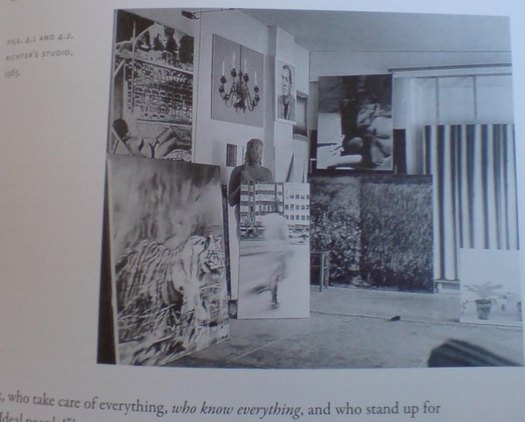 Richter’s studio, 1965, as seen in Elger’s A Life In Painting. Note the lady in the bikini on the left, which
Jasper Johns is well known for destroying his early work, thereby managing and reordering the story of his art by altering its history. But he is by no means alone. Gerhard Richter does it, too. And by turning his image archive and even the list of his paintings into works of art in their own right, Richter might have Johns beat.
Here is an excerpt from Dietmar Elger’s 2009 Richter bio/history, A Life In Painting, which I hadn’t noticed until recently:

In fact, Richter destroyed most of his early [i.e., pre-1962, as well as early photo paintings] works. They are known now only through reproductions in his well-organized archive. There was never, however, a radical break of the sort suggested by his self-organized catalogue raisonne (Werkverzeichnis, or “work list,” as he terms it). This catalog is one of Richter’s ongoing projects–a work in itself–and has long been a subject of controversy. Catalogues raisonnes are ordinarily assembled by scholars, who strive to document every authentic work by a given artist, and are organized chronologically. For Richter, the point is less to establish authenticity than to establish a trajectory within the artwork that he deems acceptable. His catalog does not include all of his work, nor is it consistently chronological. The artist has always excluded his earliest work; while some critics would like to believe that it documents the first paintings that incorporate media images as source material, this is simply not the case. [pp. 44-5.] 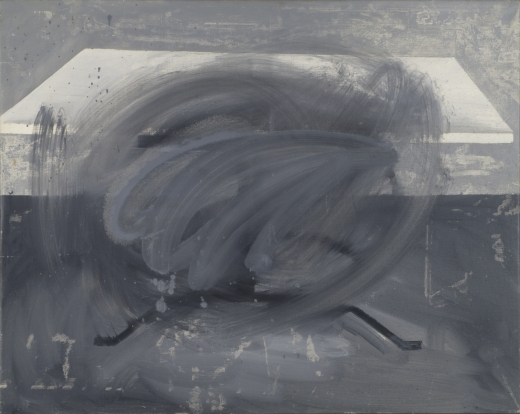 Tisch/ Table, CR-1, 1962, via gerhard-richter.com
Count me as one of those critics, or viewers. I knew he’d painted works before then, but I had no idea, for example, that Tisch, which is listed in Richter’s definitive-seeming numbering scheme as CR-1, was actually painted after several other paintings in his catalogue raisonne. It’s No. 1 because looking back from the late 1960s, Richter had figured it was a good place to start.