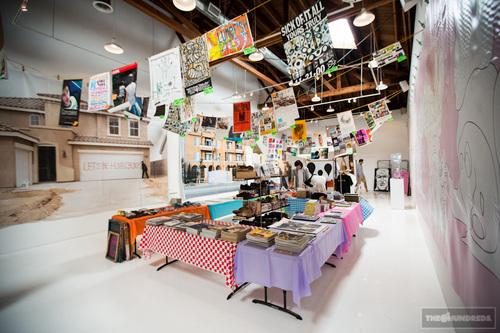 So I start looking around for installation/shop shots of Aaron Rose’s Storage Unit Fire Sale, which just opened at Known Gallery in LA, and what’s the first thing I see? At The Hundreds?
That’s right, not decks or kicks or posters. Photomurals. By Mike Mills.
They’re vinyl prints, of course, as most giant images are these days, but they are rather awesome nonetheless.
Except technically, they’re not by Mills, but of him, spraypainting his messages in his suit. There’s “Let’s all be human beings,” and “Stop Hiding.” I called about them, and learned there’s are some other ones, “Love is worth it,” and “Neither of us can get to heaven unless the other one gets in,” somewhere. Ah, here’s the latter, in Ann Duray’s coverage at Juxtapoz. I like the way the low-res original fits with the vinyl inkjet. Meanwhile, yow, Duray’s also got a picture of a larger-than-life full-length of Terry Richardson. Roll that one back up. 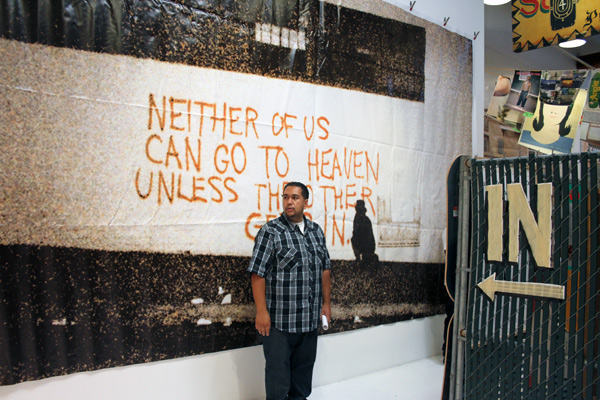 And then that huge pink and white image up top on the opposite wall is also by Mills. Before the Known guy could look them up for me, I found the images on Mills’ website; they’re all from a 2004 show at the Mu Museum in Eindhoven titled, Not How When or Why But Yes.
Mills mentions the “cross-disciplinary work” of Charles Eames as an influence, but then only mentions furniture, “architecture, films, exhibitions and toys,” not art per se. And he’s expressed some wariness toward the gallery-centered confines of the art market. Though he’s since married Miranda July, who has since been making sculptures that have turned up in public venues, the Biennale, etc. 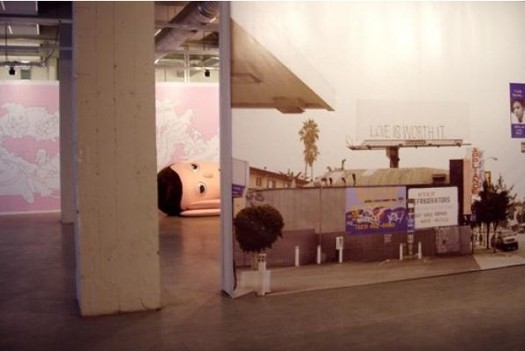 Which, it’s not clear how he considers these awesome prints, but I bet he’d not think they’re art objects in the commodity sense, just large prints, souvenirs from the show that were too awesome to trash in Holland. And then what was that giant, plush reclining Buddha sticking his/her head out of that Mu Museum installation, right? D’oh, no way, scroll down to the last photo there. It’s in the show and for sale, too! Rose really stored that thing for eight years? That’s gotta be $10k right there. Impressive.
It’s kind of interesting to see things outside the “gallery system,” though, and how they’re considered and discussed–and shown and priced and bought and sold. In the case of these murals, they’re unique, and pretty cheap–$1,400 or so, and the big pink one’s like $5,000. They roll up for easy storage.
One Man’s Treasure [thehundreds.com]
Aaron Rose Fire Sale at Known Gallery [knowngallery]
Graffiti, Mike Mills, 2004 [mikemillsweb.com]
Not How When or Why But Yes,