Add Damian & Cosmas’ importance to Joseph Beuys and his renaming in 1974 of the then-new World Trade Center towers after the twin physician saints to the list of things I did not know about but probably should have.
From Marina Warner’s generous discussion of Damien Hirst in the LRB:

[Hirst] is named after the patron saint of doctors (usually spelled Damian), who, with his twin brother Cosmas, performed the first surgical transplant when he grafted the leg of a Moor who had fallen in battle onto the stump of a white Christian knight. This operation, depicted on altarpieces in the saints’ many churches, can’t be consigned to the antique glory hole of weird Catholic legend, for it was crucial to Joseph Beuys’s dream of revolution: a vision of inter-racial fusion, of the resurrection and reconciliation art can achieve. In one of his works, Beuys eerily renamed the two towers of the then newly built World Trade Center after the brother saints: did he do so in some wan hope that the towers could be transfigured into instruments of good?
Beuys, needless to say, is second only to Duchamp in importance to the current philosophy of making art.

Needless to say, I would have known if only I’d been a little more faithful in my Brooklyn Rail reading. Because that’s where I found David Levi Strauss’s thorough, if slightly Nostradominous, discussion of Cosmas und Damian, Beuys’ multiple [?] based on a 3D postcard of the Twin Towers. 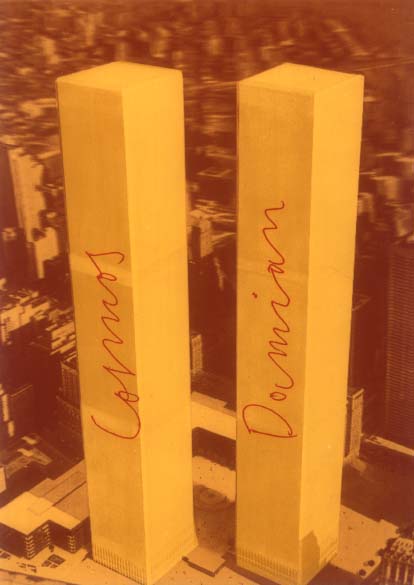 Once A Catholic… [lrb.co.uk]
IN CASE SOMETHING DIFFERENT HAPPENS IN THE FUTURE: Joseph Beuys and 9/11 [brooklynrail.org]
David Levi Strauss’s essay was also just republished as one of those 100 chapbooks from documenta 13 [amazon]