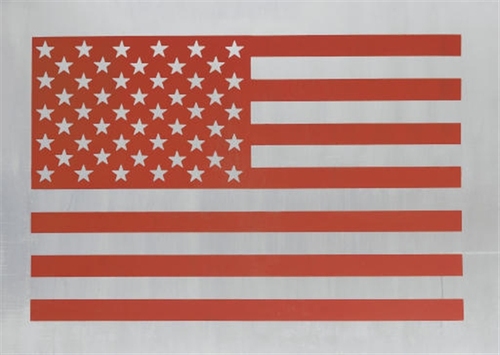 Big Hole, 1994, 90x130cm, apparently did not sell at Christie’s day sale in Nov. 2007. It’s inscribed, “This can be hung in any of four directions” on the back.
I can’t remember where I last saw Cady Noland’s flag, Big Hole, but I remember where I saw it first: at Paula Cooper’s gallery in SoHo, in the Spring of 1994. It says #1 of 1, but I remember there being more than one flag. It was like the 10th most interesting thing in that show at the time, and I didn’t give it much thought, but now…
Maybe I saw it again last fall, on Joshua Abelow’s blog. Which would have been when I was in flag mode, sweating harder about finishing the saga of the missing Jasper Johns Flag painting.
It definitely made me want to start silkscreening stuff on aluminum.
Now about that Johns Flag…
FIFTEEN MONTHS AND FIVE MINUTES LATER UPDATE: LOL, no way, here’s the Gallery Beat crew’s visit to this Noland show. With Joe, Paul H-O and Walter Robinson, plus a cameo by Holland Cotter, and–someone should ask James Kalm if their shitty guerrilla camerawork was his inspiration. But whatever, thanks fellas, it’s the best we’ve got now: