In the 4th part of his video walkthrough of MoMA’s Willem de Kooning retrospective, James Kalm has an extended clip of curator John Elderfield talking with Glenn Lowry about how the artist’s late paintings relate to his earlier work.

Elderfield stays pretty broad, arguing that the works are valid and important, and that Gary Garrels’ and Rob Storr’s earlier MoMA show ably made their case. Which all sounds good to me. [While noting that “the topologies of the paintings are very reminiscent of earlier pictures,” Elderfield apparently felt that a press preview was not the right context for expanding on de Kooning’s practice of tracing details of earlier paintings which his assistants had projected onto primed canvases.] 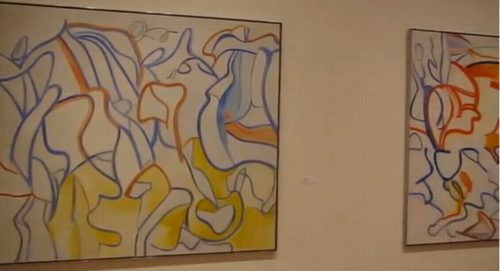 What struck me now, though, was his discussion of how the marks in de Kooning’s 80s paintings were the result of his elimination of subjectivity. Elderfield told how de Kooning “fell into a sort of trough” after seeing a hugely successful show in 1978 of his large, gestural abstractions made in 1975-7, which were in the preceding gallery. “There could have been three times that number in the exhibition,” Elderfield said,” with no drop in quality or achievement…de Kooning had said he ‘felt he could do no wrong,’ which for him, was the point at which he had to stop doing them.” 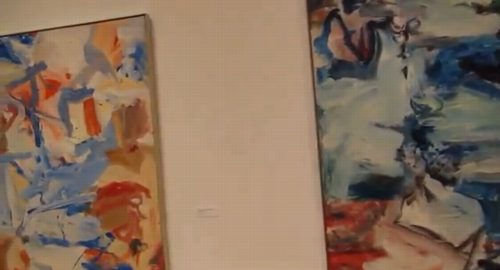 It’s an interesting idea, and it reminds me of how much I loved those 70s paintings, and losing myself in those big, sinuously virtuosic brushstrokes. It’s really too bad Kalm’s woozy, wandering camera eye is one of the few ways left to take in that gallery. 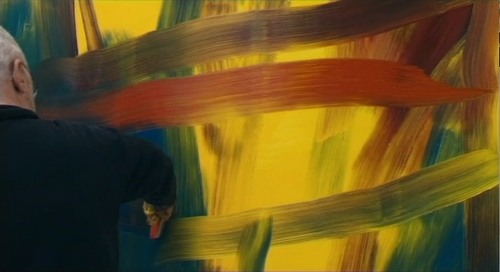 Still from Corinna Belz’ Gerhard Richter Painting
It also reminds me how much those de Koonings reminded me of the early states of Richter’s squeegee paintings. This concept of Richter painting and then overpainting as a transformative, not destructive, technique was what first got me looking at Richter’s destroyed paintings. [That, and Erased de Kooning Drawing, of course.]
Now it strikes me how the two painters share the urge to resist habit and ease. Richter picked up the squeegee in part to counter intentionality and the mastered brushstroke. If de Kooning was resisting the same thing when he changed up his approach after 1980, maybe there’s something to be discovered by seeing these two painters’ works together.