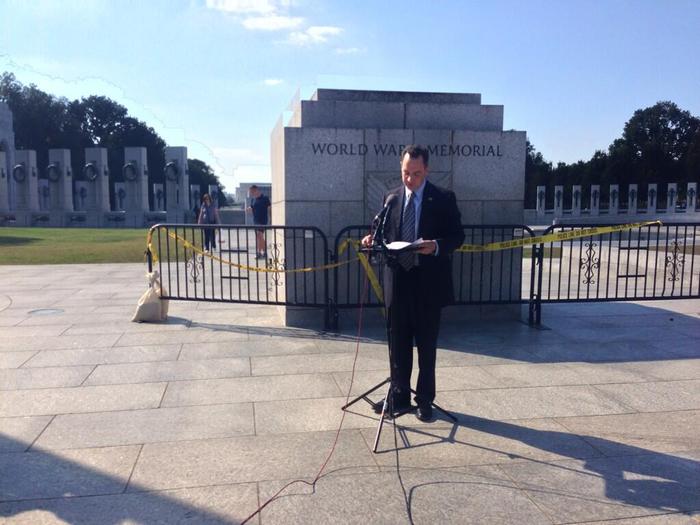 For a brief moment yesterday, the first morning of the GOP-instigated shutdown of the federal government, anxious confusion reigned. And as folks began realizing that in addition to the hundreds of thousands of furloughed and unpaid workers, and the halt to vital government programs across the country, Washington’s museums and memorials were also closed to the public, there was a ray of hope.
A tour group of World War II veterans, The Greatest Generation, were not going to stand for this assault on our great constitutional democratic institutions. So they had someone push them in their wheelchairs into the World War II Memorial as Park Police watched from the sidelines.
Yeah, then it turns out the pushers were some of the same Tea Party extremists in the House who had voted for, nay, clamored for, the government to be shut down in the first place. Last night the likes of Michele Bachmann and Steve King were promising to personally help any veterans group fight their way back into the Memorial any day if they had to. And they just dared Pres. Obama to arrest them all. Ideally, on live cable TV.
Today, with conservative media attention riveted on this Mussolinian plaza which slices the National Mall in two like a hernia operation, Park Police decided to stand aside as congressional tour guides boldly shouted, “Tear down this fence!” and “Stand our ground!” and whatever.
And GOP chairman Reince Priebus himself stood in the glare of cameras and the afternoon sun, brandishing a GOP check and offering to pay to keep the memorial open (for vets) or, in Gawker’s words, “to rent the WWII Memorial for shutdown theater,” and –hey, how’d those people in the background get past Obama’s Black Fence of Tyranny? It’s almost like that little fence was put there, in front of the sign, and strewn with police tape, just so, just to be photographed. Can we get a wide shot on this one?
[image tweeted by HuffPostPol reporter @RyanJReilly: “‘Go do your job, idiot!’ — protestor to @Reince at WWII Memorial”]