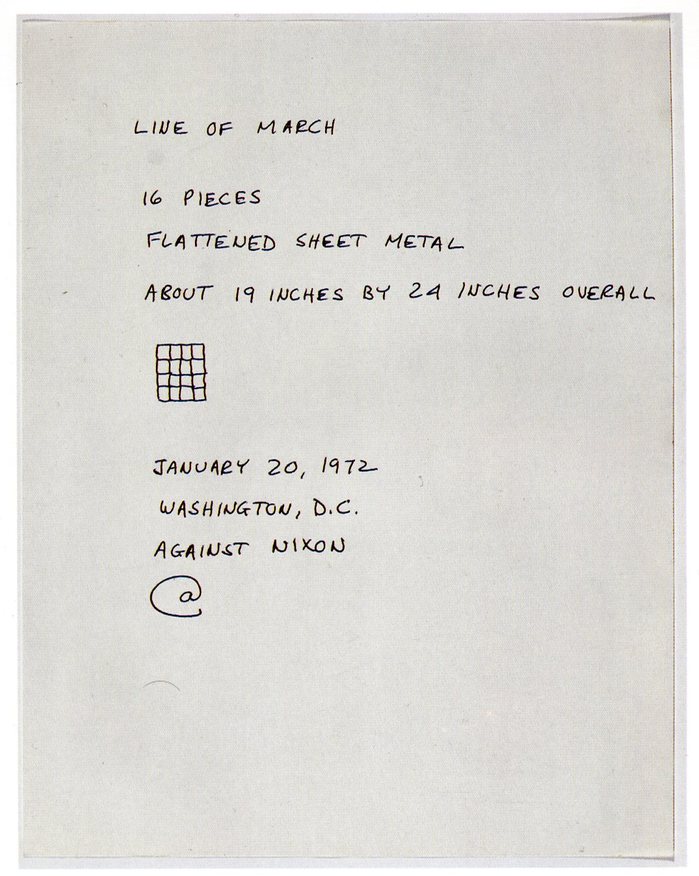 From grupa o.k. comes this 1972 diagram [drawing?] by Carl Andre, Line of March, which describes a smallish floor piece. And it connects to the second inauguration, on January 20, 1972 [sic?], of Richard Nixon.
Courtney Fiske blogged about finding a 1973 ARTNews article about Line of March titled “The politics of cheese.” Andre had found the index card-size sheet metal pieces for the sculpture on his way to Washington, where he’d planned to protest Nixon’s inauguration by installing a work, titled American Decay at Max Protetch’s gallery on M Street:

The piece consisted of 500 pounds of cottage cheese anointed with 10 gallons of ketchup, resting atop tar paper, covering an area about 12 by 18 feet, with the cheese itself about 10 inches deep. Although the piece was not for sale, one collector did take home ten small cans of the Sealtest large-curd cottage cheese.
There were those who felt, on seeing the piece, that Andre had taken an obscurantist stance, but they should remember that during the campaign Nixon’s lunches consisted of cottage cheese coated with ketchup. It has not yet been determined if the cottage cheese Nixon ate was Sealtest large-curd. At any rate, American Decay, which opened at the Protetch Gallery on Jan. 19, closed on Jan. 20 because of the putrid smell which permeated the premises.

I can’t find photos of American Decay, but I will definitely look. It sounds gross, but fantastic.
The student of politics will also note that Nixon’s inauguration actually took place on January 20, 1973, a full year after the date in the drawing above. Gilbert & Lila Sullivan had another Line of March drawing in their collection that does have the “right” date.
So now I really have no idea what this piece of paper is.