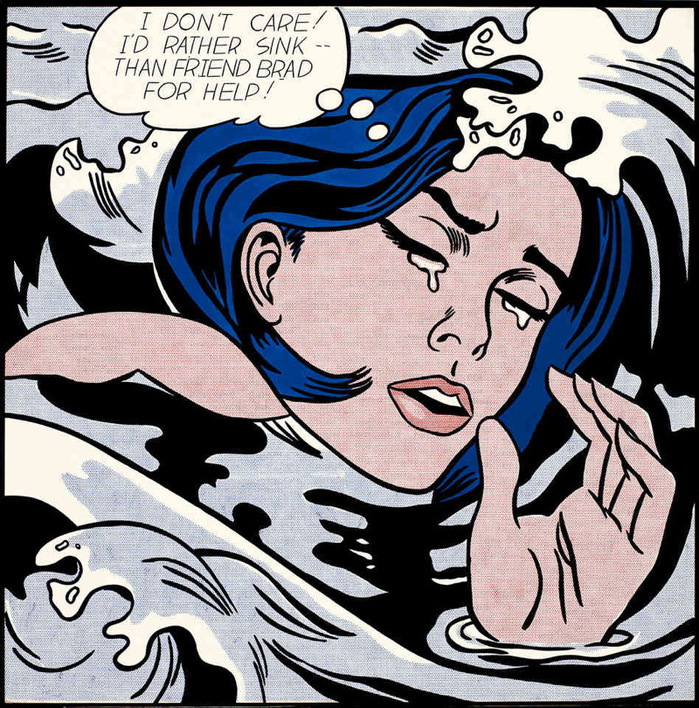 Than Friend Brad, 2013
via @willak comes this collaboratively written essay by Brad Troemel, Artie Vierkant, and Ben Vickers, Club Kids: The Social Life of Artists on Facebook. It is so perfectly and myopically descriptive of their situation as social network artists and curators without recognizing the situation as deeply problematic, that it’s exasperating to read. Until the very end, when they seem to conclude that yes, Facebook is not the world, or even the internet, but a “bad infinity” [pace Hegel], where the seeming endlessness of choice is a controlled, corporate deception.
And so, too, would be the very idea of an artistic practice or an artistic dialogue that centers/exists/originates on Facebook, and that is comprised of posts documenting “the artist’s online brand” and her “lifestyle,” activity driven by and judged by likes and friendings and other technosocial cues.

Why go to such great lengths to make and photograph a painting that will net 5 Likes when a photo of you and your friends eating 50 McChickens could net hundreds?

First off, don’t get me started on the “make and photograph a painting” thing; I’ve curated Contemporary Art Daily-only shows in my head the same as anyone else. So please don’t pretend that actually painting a painting–especially one that requires going to “great lengths,” whatever that may mean–doesn’t change your very being just as surely as eating 50 McChickens does.
And anyway, it seems like this essay was written well over a year ago, before Facebook’s IPO, and Troemel and friends are still ordering exclusively off Art’s Value Meal, tumblin’ rebloggable insta-art, curating themselves into IRL group shows without a critical care in the world.
In this new age of Smarm we suddenly find ourselves living in, Brad and Artie’s mapping of their platform’s spectrum of critical discourse seems very apt:

Feedback, if any, is always on a scale ranging from positive to non-existent–the Like function itself being explicitly designed as a binary function between total consensus and total lack of response. Instead of moving the artistic conversation forward, most people are literally just happy to be part of the online conversation, to be part of the club or whatever other indistinct social group they silently pledge allegiance to.

This seems like a very shitty environment in which to make art, and frankly, I’d be surprised if people who spend six figures for two years of MFA crits would put up with it. Or maybe that’s exactly what they crave after they’re out of school: affirmation, reassurance, participation, belonging, naked acknowledgement of one’s existence and activity.
But what’s the alternative?

Posting work to the internet with no social network readily in place is synonymous with the riddle ‘If a tree falls in a forest and no one is around to hear it, does it make a sound?’ For young artists on the internet the answer to the forest question is ‘no’- their work will easily go unnoticed, making their participation as a social actor an a priori necessity to contextualizing what they do as art.

Except it turns out that just because you can’t hear it, doesn’t mean it doesn’t make a sound. Elephants can hear sounds below the range of human detection. 7-Eleven owners blast music at loitering teenagers at frequencies Olds cannot perceive. Don’t make art only for your friends’ affirmation, or for Hans Ulrich’s attention. There are people in the world you don’t know.
It would behoove the Facebook Artist to get off Facebook once in a while, at least, where you can find critical responses beyond “total lack of response,” and people making and engaging art that is not interchangeable with lifestyle, and who don’t give much of a damn about fave parties.
Club Kids: The Social Life of Artists on Facebook [dismagazine]
UPDATE Wow, so much quietly delivered support for this post. Intriguing! And thanks!