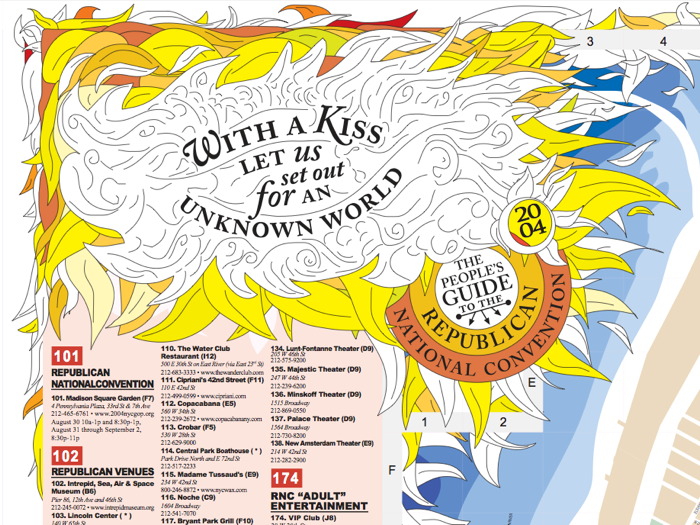 The first map I made was in 2004. It was done with a group calling itself Friends of William Blake. I drew Manhattan south of Central Park and we detailed all the events and activities in New York affiliated with the 2004 Republican National Convention. The idea was to make a free map that helped people “get in or out of the way” of the RNC. It worked–to the extent that we showed both protesters and clueless conventioneers the strip-club where the Utah Republican delegation was hosting a fundraiser, and the midtown location of the Dick Cheney gala. The map did not show directions as much as sow havoc.

There are still print copies of The People’s Map to be found, but it looks like Activist Magazine is the only place online that hosts the original PDF [pdf, 1.1mb]. I’m going to host it here in hopes that it’ll get picked up and archived around a bit.
Meanwhile, the rest of Chan’s CAA thing is about the maps in his Waiting For Godot project. Keep reading.
X jxm vlr rpb pelria ilpb vlr Paul Chan [artjournal.collegeart.org]
Mass Arrests During ’04 Convention Leave Big Bill and Lingering Mystery [nyt]
The People’s Guide To The Republican National Convention, original single sheet version, 2004, rncguide_map.pdf [greg.org]