I said it publicly a couple of times now, and I was more cynical about them then than I am now, but when I first saw Richard Prince’s Canal Zone paintings, I thought he was trying to see how bad he could paint. I half-joked that he wanted to see if his new dealer Larry Gagosian could really sell whatever shit he literally slapped together.
The higher concept way of putting that, of course, is that Prince was interested in process over product, in setting constraints and parameters on his practice, and in destabilizing himself by experimenting with techniques he knew he hadn’t mastered.
I really came to appreciate the paintings, not so much for themselves–they’re still undeniably shitty–but for their catalytic effect, the way the Cariou lawsuit compelled Prince to talk at length and under oath, about his work. His deposition is really pure art historical gold, and the way art is discussed in the legal context is disorienting and exciting to me, language-wise. 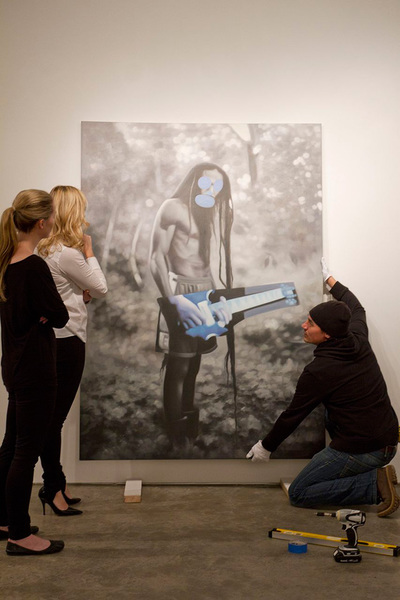 Still, as the legal case drags on, I find the paintings themselves–more precisely, the images of the paintings themselves, since almost no one’s seen the actual objects for years now–kind of tedious, beside the point. And my interest wasn’t rekindled by Banal Zone, Jomar Statkun show of Chinese Paint Mill copies of Prince’s paintings. Literally any idiot can order Chinese Paint Mill paintings. Ask me how I know! And anyway, those joints were Inkjets by NancyScans.
But I am glad that Statkun’s show serves as the catalyst for Prince to birdtalk about making the Canal Zone paintings. Because CALLED IT:

But aren’t I curious about the “Chinese” paintings my anonymous friends ask? No I’m not. From what I’ve seen they look worst than some of the paintings I’ve already painted. You have to understand that when I started out painting my Canal Zone paintings I had no intention of making good paintings. In fact most of them were never finished and the majority were an experiment with new painting techniques. (This is the first time I’ve gone on the record about this stuff). Anyway… there are a couple of Canal Zone paintings that WERE aggressive and satisfying in ways that hard to describe… they were done quickly and under the influence of certain music I was listening to at the time… and part of this “screen play” I was toying around with. They started out as storyboards for a “pitch” called Eden Rock. (You got to start somewhere). They started off innocently enough when I found this Rasta book on vacation and I simply starting to use some of the images in the book for collages. (Early on I pasted a guitar over the body of one of the Rasta’s, kind of lined it up so that the Rasta looked as if he was “wailing” away… and there you go… off to the races). I can’t say it more simply. Wild History.