Oh-ho, here is an awesome entry for The VW Years, greg.org’s ongoing mission to collect firsthand accounts of John Cage and Merce Cunningham’s VW Bus. The idea comes from the title of a chapter in dancer Carolyn Brown’s fascinating memoir, Chance and Circumstance: Twenty Years With Cage And Cunningham.
But this account’s from art dealer Virginia Dwan, in Artforum’s 500 Words, as told to Lauren O’Neill-Butler:

In New York, I became very interested in and involved with Minimalism and gave solo shows to Sol LeWitt and Carl Andre, and later Robert Smithson. When I moved the gallery to West Fifty-Seventh Street, I didn’t have enough space for them to do very large works, so I kept the gallery in Los Angeles with my assistant John Weber still working there, and I sent the artists out there to put up their shows. A favorite memory was when Merce Cunningham, John Cage, David Tudor, and Robert Rauschenberg drove from New York in a Volkswagen bus for one of Robert’s shows. They parked it in front of my house in Malibu and out of this bus came nine people. It was like a circus bus with endless people emerging. They had all driven from New York to Los Angeles and stopped along the way giving performances. I didn’t know how they all fit, yet there they all were in the bus.

The Robert she’s referring to has to be Rauschenberg, not Smithson. And it looks like Rauschenberg showed twice at Dwan’s Los Angeles gallery, in 1962, and 1965. The first show corresponds to what Brown called “the golden years” of touring, which ended in June 1964, when Rauschenberg won the Venice Bienale during the company’s tour of Japan, and it became a problem, and there was a messy split, so the idea of all these now-celebrities piling back into a VW bus and dance-busking their way to Bob’s show seems, at the very least, improbable. 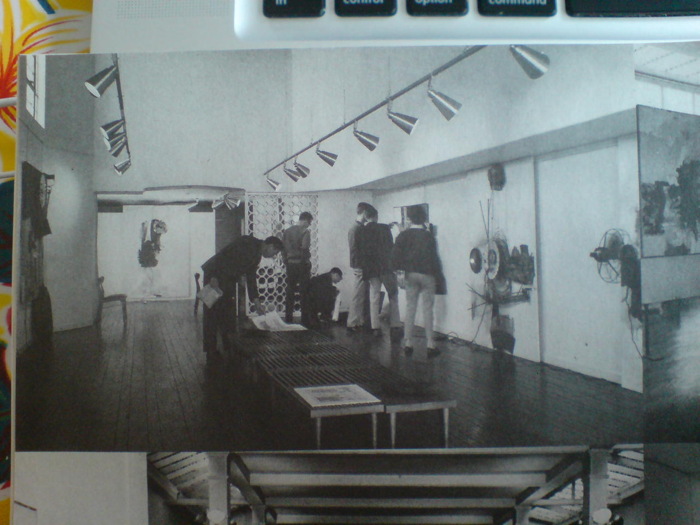 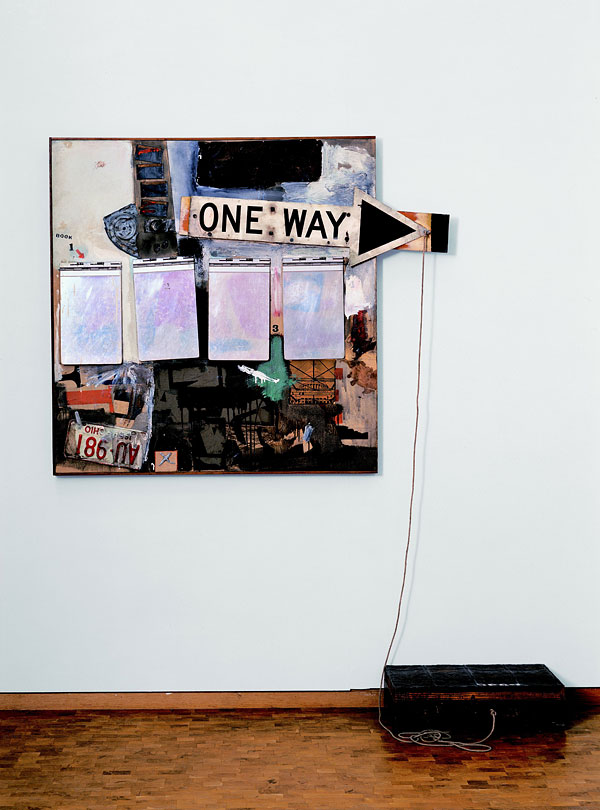 Robert Rauschenberg, Black Market, 1961, collection Ludwig Museum, Cologne
Black Market is an amazing and important work, and one that relates directly to another ongoing greg.org topic: Short Circuit and Jasper Johns’ Flag. Black Market contains a valise on the floor with various items and diagrams from Rauschenberg which viewers would exchange for a personally valuable item of their own. There’s a little Rauschenberg stamp pad, too, so everything you put in would be(come) a Rauschenberg. Think about that for a while.
It was first viewed in 1961 at the Stedelijk, and had its US debut at Dwan. There’s a lot more going on with this work, but it’s already too tangential for words right now. Suffice it to say, Jasper Johns was not on the bus.
Virginia Dwan | 500 Words, fortunately part 1 of 2 [artforum]
Previously:
The VW Years: Ch. 1 – 1957 – The Italian gameshow mushroom boondoggle
Ch. 2 1956-62 – Remy Charlip & Steve Paxton
Ch. 3 – John Cage
Carolyn Brown, Part I
Carolyn Brown, Part II, the real inspiration
The VW Appears: a snapshot from the John Cage Trust
The VW Years: Appendix: Living Theatre