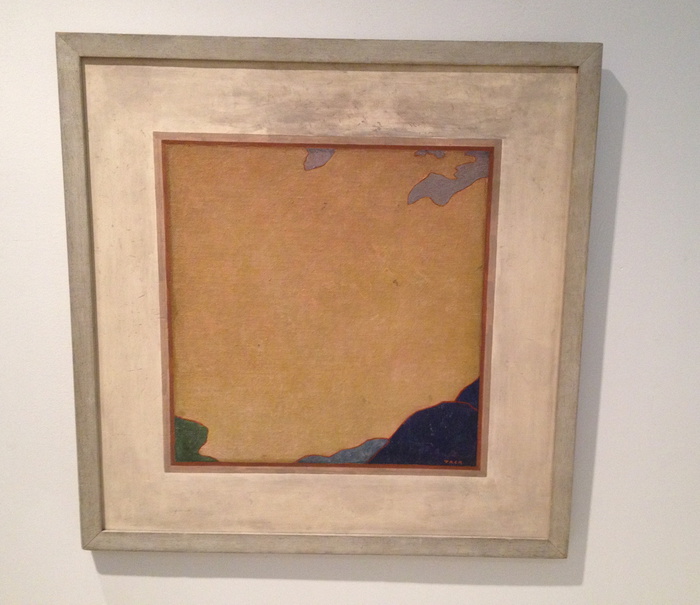 I went to the Phillips yesterday to see the “Made in USA” show and to get out of the rain. After seeing the nice John Frederick Peto trompe l’oeil, I was distracted and annoyed by the grain of the canvas in some John Henry Twachtman painting or another. No sooner had i sworn eternal allegiance to gesso than I turned the corner, went up 1/3 a flight of stairs, and was stopped cold by Augustus Vincent Tack’s painting, Evening. And I had to take it back.
What an amazing little painting. The Phillips is Tack Central. They have 79 of them. I’ve never seen this one, though, nor its similar-looking partner Dawn, which faces it in the stairwell.
Almost every Tack in any other museum was foisted on them by Duncan Phillips. [Tyler did a nice post on the Tack paintings in the Phillips in 2011.] Born in 1870, Tack painted classical moderne murals, more traditionalist portraits, and extraordinary landscape photography-based abstraction.
Obviously [sic] it’s the abstractions that amaze here. He really only did them for Phillips, between 1922 and 1934, who apparently became disappointed when they didn’t change the course of abstraction and modernism. [Curator Leslie Furth writes about Phillips’ unrealized hopes for Tack’s critical uptake, and how the artist seemed to drop the abstract ball decades too soon.] Tack, Phillips wrote in 1933, was destined to have “a limited reputation as an…eclectic painter…rather than as one of America’s most original painters.” This, from his biggest fan. 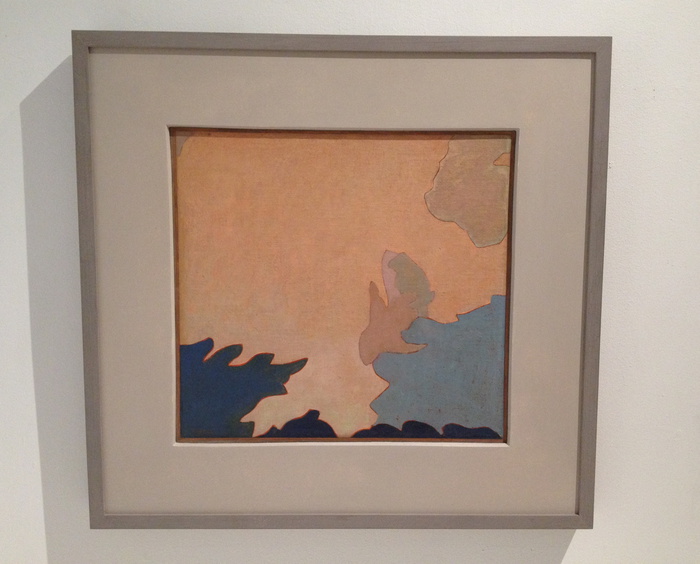 Evening and Dawn were painted after this letdown. “Between 1934 and 1936,” is how the Phillips dates these abstractions, which were variously willed to the museum by the artist or bought from his wife’s estate in the 1950s. Tack would blow up details from photos of Death Valley and transfer the forms of clouds, rocks, mountains, sky, whatever was there. [Stieglitz was taking similar-sounding photos, abstractions of clouds known as Equivalents, at the same time. Several are in the show.]
Let’s be real here, though. He’s sort of like family for the Phillips, the wistfully visionary uncle, but the reason anyone cares about Tack at all is because his paintings look like Clyfford Stills. Bafflingly so. Frustratingly so. Amazingly so. Still was the titan Cronus to the AbEx Olympians. But what would that make Tack? Uranus? Except the lineage is not clear, or even suggested. Still was sure Newman stole zips from him [which makes him, what, Prometheus?], but though Still was in Virginia in the 20s and 30s, and may have visited the Phillips, no one really considers that Still got the core of his abstraction strategy from Augustus Vincent Tack. It’s more likely [to me] that their paintings are similar because their inspirations were similar: the powerful forms, colors, light, and space of the western landscape. 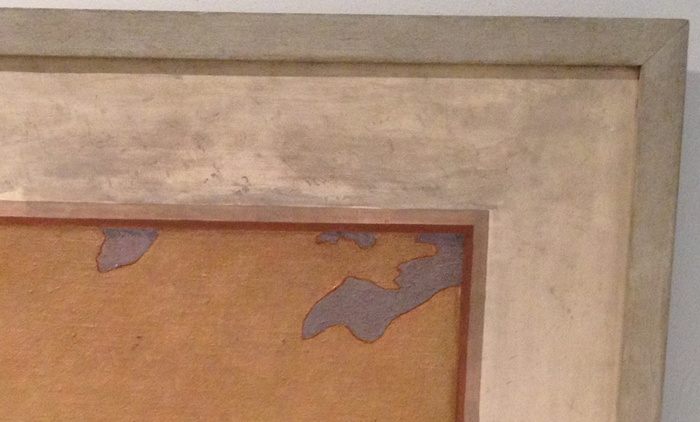 But that’s not important now. What really blew me away about Evening was that Tack had painted a painting of a painting. That’s entirely flat, as flat as a Peto, and just as tricky. The abstract center, where Tack signed it, has the tooth of the canvas still visible, but the mat/wall part, the smudged space around it, is smooth. And it’s possible that it’s a mat, not a wall. Maybe it’s even likely. Dawn has a hardboard mat/border around it. See the shadow along the top edge? And Evening has no shadow. This is not a academic trompe l’loeil. But the little white along the top edge of the painting, which separates it from the schmutz, could read as a highlight.
Forget Still. Was Tack anticipating Johns? And Richter, for that matter? Was Tack an eclecticist painter too many decades ahead of his time? I doubt it. And that’s the problem with a word like “anticipate.” It seems to me that Tack was in and of his time and place, and as a capable, open-minded painter, was aware of a whole range of possibilities. And he tried them. And they worked. But he also stood apart from the social structures and networks in which art history was self-consciously created.
Tack’s practice and his trajectory should make us more aware of the social, interpersonal forces at work in art history, and of the bias we have for a heroic narrative of breakthrough, discovery or innovation. Many of the painting possibilities we credit to later painters were also known to a random guy like Augustus Tack. But he didn’t influence anyone, except Duncan Phillips. Which, on the flipside, Phillips’ championing of Tack’s polyvalent work to the institutional powers of the day also didn’t stick. But maybe our more eclectic time can find something to learn from someone like Augustus Vincent Tack. Off to the library.