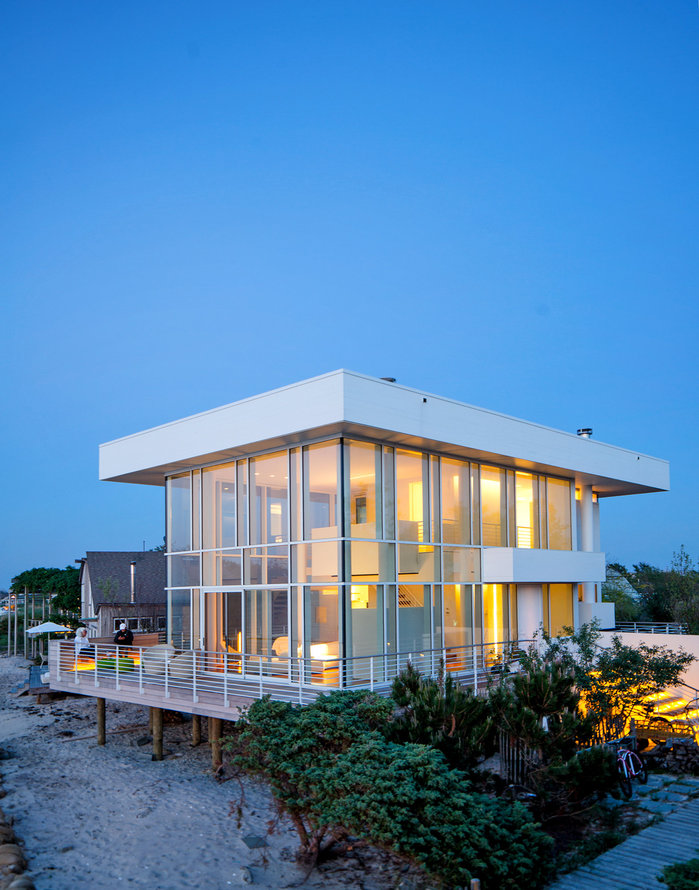 Suarez House, Richard Meier, 2012-13, photo Trevor Tondro/NYT
It’s the funniest thing, just last night I was thinking about Richard Meier’s first house, which he built on Fire Island in 1962. And lo and behold, Meier’s second Fire Island house just turned up on the front page of the Home section of the Times.
The Times says “it was like coming full circle,” but honestly, if the projects show anything, it’s how far Meier has traveled in the intervening 50 years. The 1962 house, built for Saul Lambert, was a prefab box, assembled in a couple of weeks from a pile of lumber cut to order by a log cabin manufacturer in Michigan. The 2012 house, built for Phil & Lucy Suarez, is a 2,000-sf steel and triple-glazed cube which the contractor called “a little skyscraper,” and which the Times dubs “Meier’s high and mighty beach house.” It’s basically a penthouse from Meier’s West Village towers, plopped down amidst the scrub oak and stick shacks of Fair Harbor.
Which is not to say it doesn’t look great. 2,000 square feet turns out to be plenty to get the full Meier Effect. 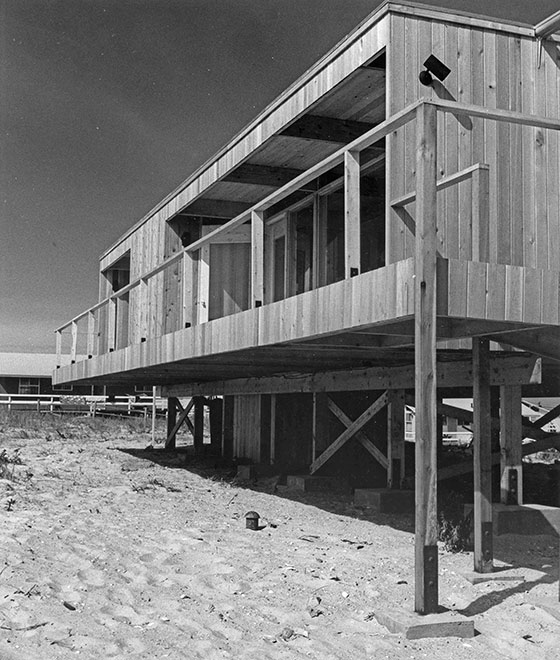 Lambert House, Richard Meier, 1961-2, image via architect/NYMag
But call me old-fashioned, I really like his first house best.
The Lambert House is special for me because it was one of the first obscure things I dug up. An architect friend, Chad Smith, had noticed an interview with the actress Anne Bancroft, where she mentioned living in a shingle-clad Meier beach house with her husband Mel Brooks. Which set off some cognitive dissonance. So I started Googlediving and turned up more info on the oceanfront house, which was in Lonelyville.

Over the course of a couple of days of back and forth, Chad wrote about the Lambert/Brooks/Bancroft House on his architecture blog; and he heard from neighbors, and eventually, from the house’s current owners, who shared stories and pictures. It was a somewhat euphoric process, connecting these blog worlds to the real world, and pushing information, then knowledge, out there. 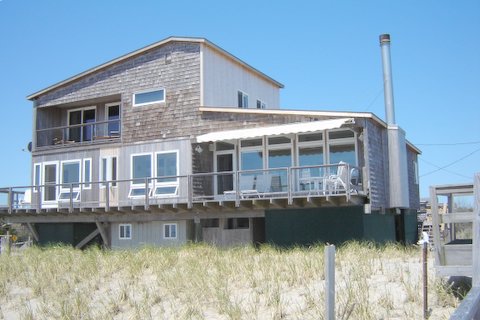 Chad was stoked, too, and kept up conversations with the owners for a while, maybe floating the idea of a renovation, but I don’t think anything ever happened. For my part, it was too soon so speak ill of the dead in 2006, and though Mel Brooks is still a genius, let’s face facts: between the shingles, the second story, the rooflines, the doors and cut-out windows, the add-ons, and on and on, they completely ruined Meier’s design.
The only proper thing to do is to strip the house back to the original box.
I mean, just look at it; there’s nothing there, and it’s perfect. How many times has this exact open-plan, 2BR house been designed by prefab-loving modernists on a budget in the last 50 years? It’s the Glass House made out of 2-by, on stilts. Anyway, I resolved [again] last night to earmark my 15th, but certainly no later than my 20th million toward buying Richard Meier’s first house and restoring it to its stripped down glory. And if someone beats me to it, that’s probably fine with me.
Richard Meier’s High and Mighty Beach House [nyt]