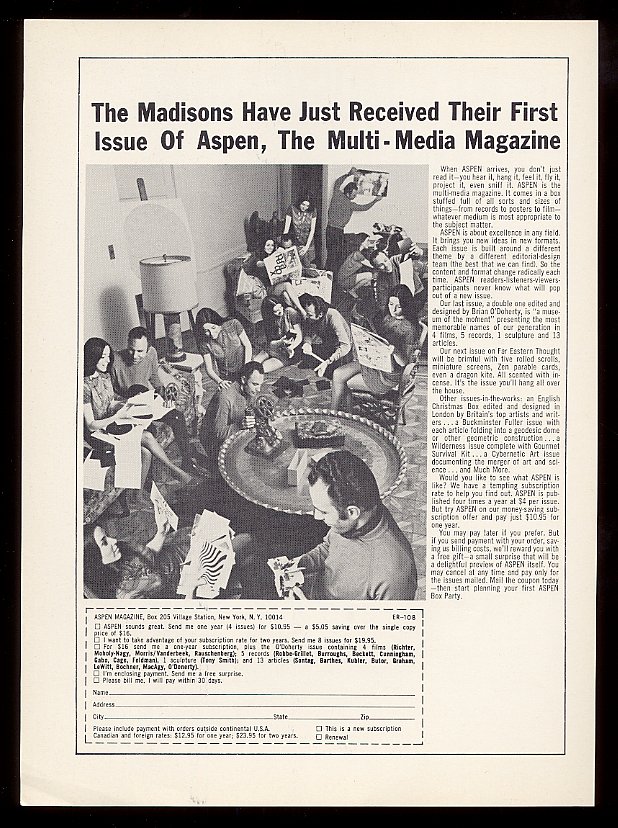 Here is an ad for Aspen Magazine in which The Madisons are composited all over their living room with pieces of various Aspens, including Brian O’Doherty’s “Museum in a Box,” Aspen 5+6 (1967). Actually, the text calls it a “museum of the moment.”
And here are a bunch of awesome-sounding Aspens which really did not happen like this.

Our next issue on Far Eastern Thought will be brimful with five rolled scrolls, miniature screens, Zen parable cards, even a dragon kite. All scented with incense. It’s the issue you’ll hang all over the house.
Other issues-in-the-works: an English Christmas Box edited and designed in London by Britain’s top artists and writers…a Buckminster Fuller issues with each article folding into a geodesic dome or other geometric construction…a Wilderness issue complete with Gourmet Survival Kit…a Cybernetic Art issue documenting the merger of art and science…and Much More.

O’Doherty’s 5+6 really turned out to be Aspen’s peak. That British box took at least two Christmases to arrive, and the Far East issue finally appeared, sans incense, four years later, the last one. Which is too bad; I’d love to see these other issues realized.