In bizarre news, an artist collective stole part of the Berlin Wall memorial and repositioned it along the EU border https://news.artnet.com/art-world/collective-steals-berlin-wall-memorial-ahead-of-anniversary-154457

It’s just one word in one tweet, so it really shouldn’t become the point, but those who follow me on Twitter know I have a thing for the language of art news sites, and their poetic idiocies of the market. This, however, just pissed me off.

Clarification! @Sothebys staked its own money in the Giacometti but says different bidder won it. Repped by David Norman, not Ben Dollar.

It is as pure a sign as you’ll find of the pathology of current money-fixated art world that last night a half dozen media outlets filed hundreds of bid-by-bid tweets from an Impressionism auction, yet the “bizarre news” is that artists are literally trying to save lives by drawing attention to one of Europe’s existential political crises.

I had never heard of the Center for Political Beauty before this morning. They are the artist collective whose mission is to engage “in the most innovative forms of political art: a type of art that hurts, provokes and rises in revolt in order to save human lives.”
They removed crosses commemorating some of the East Germans killed while trying to cross the Berlin Wall, and have reinstalled them on what they’re calling the European Wall. The Center for Political Beauty has announced that they will cut down portions of the EU’s border fence on November 9th, during the official ceremonies surrounding the 25th anniversary of the fall of the Berlin Wall. 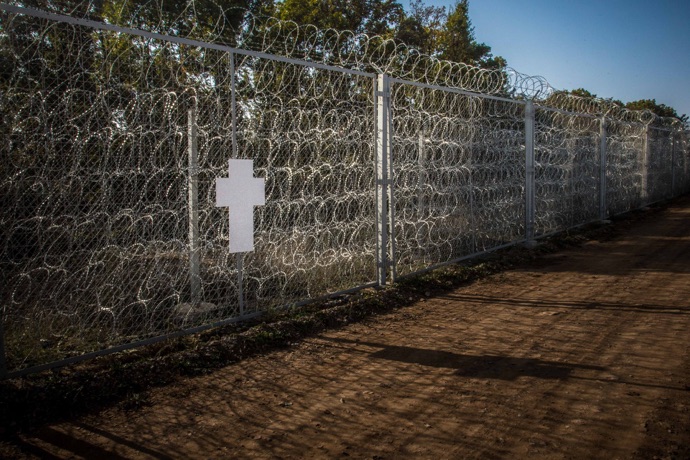 politicalbeauty.de: Keine Benutzung der Bilder ohne vorherige Genehmigung!
The photo above of a cross on a fence along the Bulgaria-Turkey border is circulating with the AFP wire service story that is the lone, primary source of English-language coverage of CPB’s project. I’ll never look at a Cy Twombly chalkboard painting the same way again. 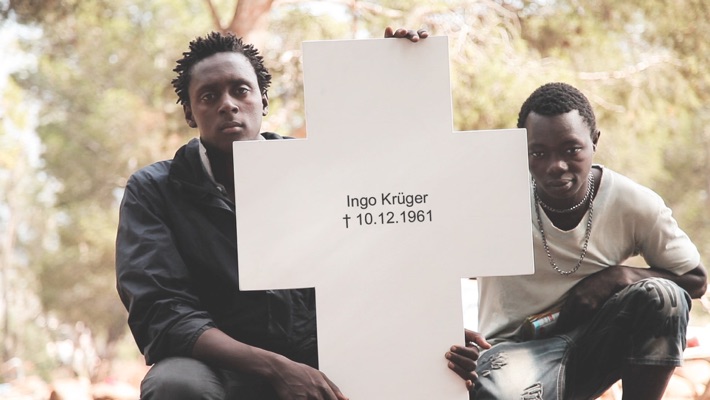 The images and details that don’t circulate, though, are more damning: At least 136 people died or were killed trying to escape across the Berlin Wall between 1961 and 1989. The UNHCR says over 2,500 Africans trying to reach Europe have drowned or gone missing this year alone. The CPB says the number of people who have died trying to enter the EU since 1989 stands at over 30,000. 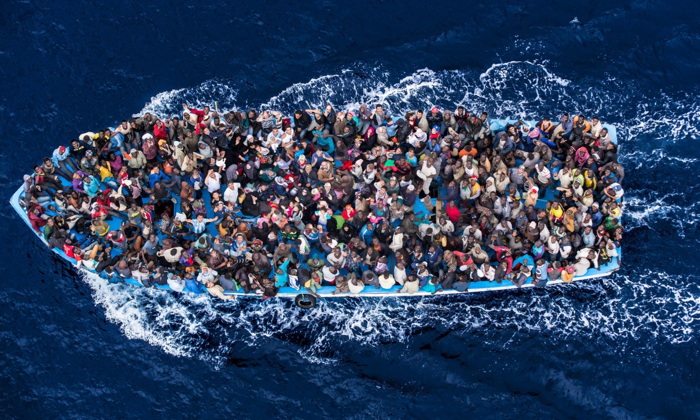 Here is a photo by Massimo Sestini of a boatful of African and Syrian asylum seekers who were intercepted by the Italian navy last June. This situation is anything else–an outrage, a humanitarian crisis, a “rendering void of the legacy of the Holocaust,” as the CPB puts it, but it is not bizarre.
And artnet should be shamed for their tendentious attempts to mock and marginalize artists pursuing something beyond the callow complacencies of the market.
UPDATE: I’m still not satisfied with this yet, or how or why it bothers me, but I’m reading Thierry du Duve’s “Art in the Face of Radical Evil” [October, Summer 2008, pdf], about MoMA acquiring and showing photos of Khmer Rouge execution victims from Tuol Sleng, and about whether they’re “art,” and what are the implications if they are:

Sobriety in exhibition design, noncommittal wall texts, and clever avoidance of the word “art” in press releases won’t succeed in hiding the fact that our aesthetic interest in photography is shot through with feelings, emotions, and projections of sympathy or antipathy that address the people in the photos beyond the photos themselves. I am convinced that something of that emotional response to the properly human ordeal of the subjects in the Tuol Sleng photos had a say in MoMA’s decision to acquire them. To suppose otherwise would be to lend the acquisition committee undeserved cynicism.