I got stopped by this line from Andrew Russeth’s report on the disclaimer Cady Noland required at the entrance to the Brant Foundation’s group show containing her work:

Since then she has shown very, very few new works (the Walker in Minneapolis has one from 2008), and she has been notoriously meticulous in controlling how her work is handled and presented.

A 2008 Noland? In the wild? Sure enough. Untitled, a familiar-looking locker room basket containing some motorcycle helmets, steel subway straps, a 16mm film reel, and a piece of metal. It’s a form Noland used since 1989, but it’s dated 2008. 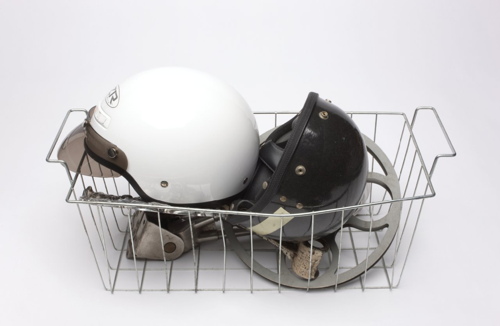 How’d they get that? In 2009?
A clue might be the donor credit, where it is listed as “Gift of the artist and Helen van der Miej-Tcheng [sic], by exchange, 2009.” Which means the museum traded a previously donated work with the artist. But what? It doesn’t say, and it’s obviously not in the collection anymore. But it’s safe to assume it was a work by Noland herself.
Sure enough, the Walker’s 2006 annual report lists a gift of a 1990 Noland from van der Meij-Tcheng. It was titled Cowboy Blank, made of aluminum and rope. 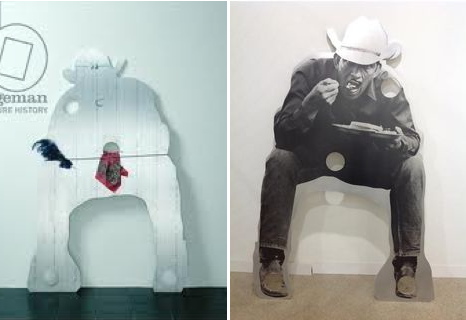 Cady Noland, L: Cowboy Blank with Showboat Costume, and R: a Cowboy, not blank, with breakfast, both 1990
But a work titled simply Cowboy Blank doesn’t show up on Google anywhere. There is a Cowboy Blank with Showboat Costume, though, an aluminum plate sculpture cut in the silhouette of a crouching cowboy, with a bandanna and an ostrich plume in its cutout holes. The Guggenheim says the cowboy’s aiming his gun, but another variant is flipped and silkscreened with a photo of cowboy eatin’ some waffles. Or maybe it’s Texas Toast. Noland executed the same silhouette in plywood, too, with a basket hanging between its legs.
Forced by no one to speculate, I’d say that van der Meij-Tcheng’s Cowboy Blank was without Showboat Costume or a fork; it had just a rope. And whether it was because it was damaged, a la Cowboys Milking, or it was just not sitting right with her, Noland decided it was not a work she wanted in public circulation. And so she took it back, but only after making the Walker a little something to replace it with.