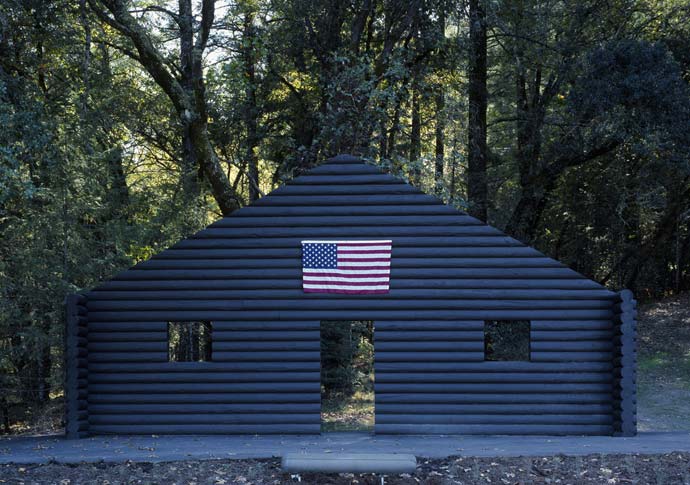 
What is the deal with Cady Noland and her sculptures, especially this Log Cabin (sic) situation?

Which is not to say this Log Cabin. Let’s be clear, the Cady Noland sculpture above is not the one in dispute in Scott Mueller’s lawsuit against Michael Janssen Gallery. It is owned by the Stones, and is installed happily in Stonescape, their art vineyard in Napa. As of Saturday evening, Courthouse News, Artnet, Artforum, Art Market, and everyone who followed their initial report still has this basic fact wrong.
The facts about the sculpture’s history and provenance don’t line up to this work and this image, but you can’t expect a court reporter to pick up on that. The reason the Stones’ Log Cabin is mentioned or pictured at all is because it’s on Google, whereas Wilhelm Schuermann’s is not. [Courthouse News and everyone also got the basics of the refabrication wrong, and that matters, and it is because people don’t read the primary material, they just go with whatever.] But Mueller has attached the sales agreement as an exhibit to his suit, and it includes a 2-page information sheet on the artwork itself [“Artwork Description And Provenance”] that leaves no doubt what it is, where it’s been, who owns it–and some of what happened to it. I assume it was prepared by Janssen in cooperation with Schuermann. [Download it and read along: schuermann_noland_log_cabin_appendix.pdf]

Log Cabin [the full title (sic)] is described as

A sculpture consisting of a log cabin facade fabricated to the Artist’s specification, an American flag, metal rings, and paper construction plans.
a. All components, other than the wood and hardware that comprise the log cabin facade, are original to the artwork and have not been subject to any conservation, repair or replacement.

Wilhelm Schuermann bought Log Cabin [the full title (sic)] from Galerie Max Hetzler in Cologne after Hetzler showed it in 1990. It was exhibited at a couple of museums before Schuermann placed it “on long-term loan” at the Suermondt-Ludwig-Museum in Aachen, “where it was exhibited outdoors in a courtyard setting for approximately ten years. (1995-2005).
The document states, “The Artist…gave general / non-specific instructions that it should be treated with a stain or other appropriate material that would provide resistance to / protection from damage and deterioration due to weather and other natural elements.”
And that while being exhibited outside for a decade, “the artwork suffered significant damage and deterioration.” And that as a result, “a condition report was prepared in December 2010, which…recommended that the only way to ensure the long-term viability / existence of the artwork would be to replace the rotting logs with new ones.”
So they did. MasterLog Homes, Darby, Montana, the original fabricator, reconstructed the facade…”to Cady Noland’s original and exact specifications, using the same blueprint / building plan used for the original facade, and the same variety of wood / material.” 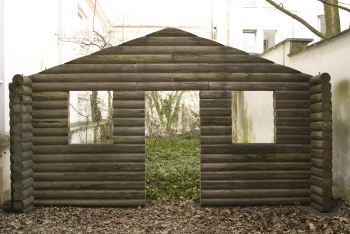 “displaywall.jpg [sic], looking a little bit worn, but not that bad; is this pre-re-fab? image: masterloghomes
Oh hey, there’s a picture on MasterLog’s c.2013 website of a log “accent wall” in a northern European-style courtyard, which looks one flag shy of a Noland.

Calling construction plans “components” makes refabrication sound like an intrinsic part of the work, yet there is no claim of Noland giving even the “general/non-specific instruction” she apparently did for staining. And nothing indicates that Noland was consulted or even informed about the effects of long-term exhibition. The dimensions listed for Log Cabin [141 3/4″ x 218″ x 31 1/2″] look neater in meters: 3.6m x 5.5m x 0.8m. 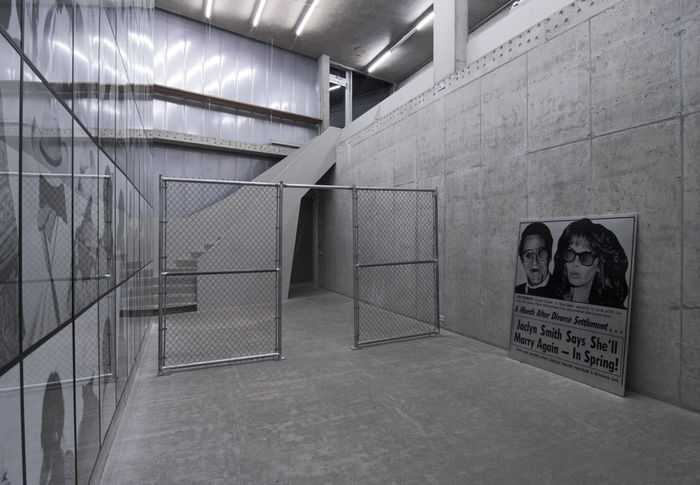 Context? You’re soaking in it! Two Cady Noland works in KOW Berlin’s mosh pit with a gigantic Santiago Sierra, 2011, image: kow-berlin.info
In April 2011, just four months after the conservation report, Schuermann put the newly refabricated Log Cabin (sic) and four other of his Nolands in a 2-artist show with Santiago Sierra organized by KOW, a commercial gallery in Berlin. The timing would argue for a link between the conservation report & refabrication and this show.
The info sheet states,

I. An image of the artwork was initially posted on KOW, Berlin’s website and was subsequently taken down, as Cady Noland did not approve of the context of the exhibition; and did not want to be shown along side with Santiago Sierra.
II. To the best of the current Owner’s knowledge, Cady Noland raised no specific objection to the artwork based on its appearance in the image originally posted on the KOW, Berlin website.

Which, I counted as “a glimmer” of a Cady Noland Disclaimer. I emailed KOW for details; so far they have not responded.
But if Noland objected to “the context” of being “shown alongside” Sierra, why were images of only one work removed? And if Sierra wasn’t the actual problem, doesn’t the Owner’s affirmation in subpoint II. suddenly seem equivocating enough to drive a logging truck through? It also sounds like Noland only heard about the show after the fact, and not from Schuermann or KOW. 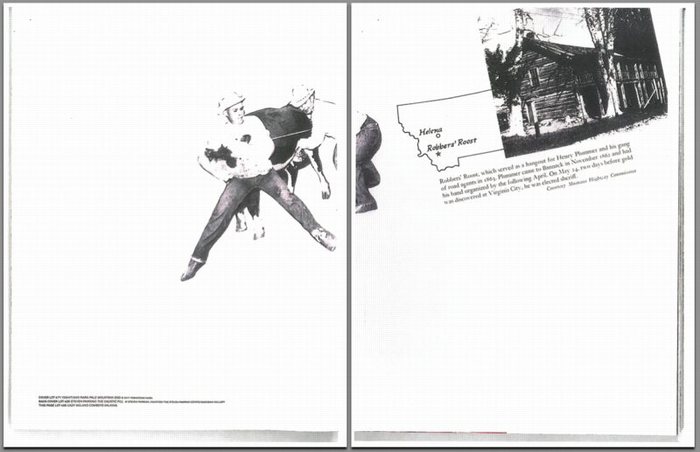 All this went down before November 2011, when the Cowboys Milking saga became public. But court records in Jancou v. Sotheby’s & Noland put Log Cabin right in the thick of it. In March & April 2011, Noland was already objecting to a damaged Cowboys Milking being sold at Christie’s. [Christie’s withdrew it; the owner tried to have it repaired; Jancou bought it, and sent it to Sotheby’s that summer, and Noland rejected it again. Sotheby’s pulled it, and Jancou sued.]
The Cowboys Milking case unfolded and resolved in 2013, which had to give Schuermann some pretty current knowledge that selling a Noland with conservation questions would no longer be his decision alone. Which is why the sales agreement for Log Cabin (sic) is entirely constructed around the precondition of Noland’s approval of the refabrication-and which also means Schuermann and Janssen didn’t have it. And no one had talked to her, because there was also clause requiring, “the party who first learns of such Artist Objection [to] promptly inform the other,” and that Mueller & his adviser’s “initial efforts to reach the Artist” would be made “under the supervision of Chris D’Amelio.”
If I had to speculate, I’d say that Schuermann assumed (or found it convenient to assume) that he could refabricate Log Cabin (sic) whenever he wanted, and he decided to do it when he put the work into a commercial show. This is how Noland learned of the refabrication, and she lodged an objection of some kind to the piece. And so the realization that there are consequences to not consulting Noland about the condition of her work came one, two, eight, or eighteen years too late.
JULY 4TH UPDATE 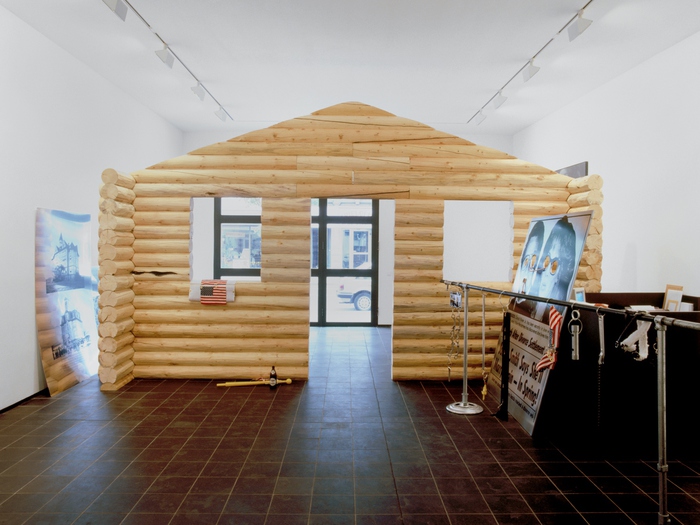 Yeah, you may want to get that treated. OR leave it out to weather. I just passed two dozen homesteading log cabins and approximately one million old fence posts. Have they never seen old pine in Germany? [image: maxhetzler.com]

Well there it is right there, people, in an installation shot from the actual show at Max Hetzler in Cologne. [A 3-artist show with Noland, Sam Samore, and Karen Sylvester, which opened 25 years ago last month, June 1990, and which was organized, as all four of Hetzler’s Noland-included shows were, by Thea Westreich. Nice work. Fantastic work, actually. The installation shots for Noland’s Hetzler shows are just amazing, Noland’s work looks so different, jammed and jumbled just so, compared to the tame, tidy standalone presentation each piece receives now. Really puts the disclaimers in context. Also, Milking Cowboys was in this show, along with at least two similar, superthin, mirrored aluminum pieces. I wonder how they’ve been holding up?]

Anyway, Log Cabin (sic) is seen here in its original state: hand-peeled finish, unstained pine. That dark gash left of the window is in the picture from Master Log Homes. So that was the original wood, darkened by weather and time, not the replacement. What has replaced it? KOW knows, but we still don’t, but I expect it looks a lot like this picture.
Previously, related: An Anthology of Cady Noland Disclaimers

[2018 update: Though referred to and reported as Log Cabin, in a court affidavit filed 4/2/2018, the artist indicates the official title of the work is Log Cabin Façade.]