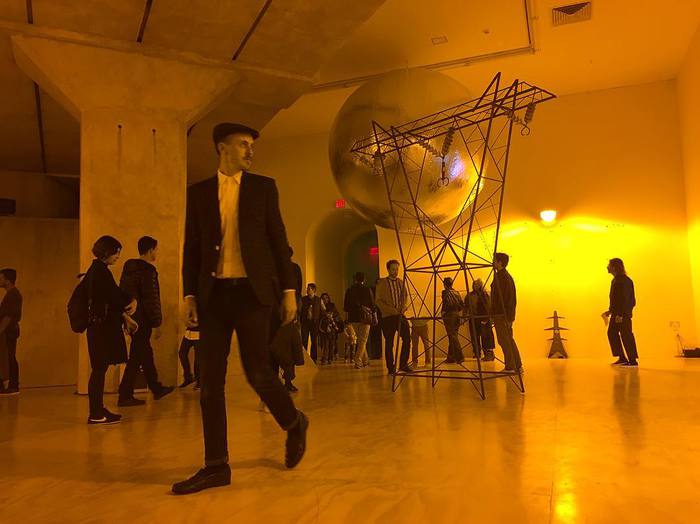 via [instagram/365days_in_nyc]
I will have more to say about it because it is blowing my mind in unexpected ways, but it has already taken me too long to shout it out: Mark Leckey has included my piece, Untitled (Satelloon), in “Containers and their Drivers,” his survey at MoMA PS1.
The satelloon is incorporated into a new installation of Dream English Kid 1964-1999 AD (2015), an autobiographical piece Leckey assembles through what he calls “found memories.”
The satelloon is a refabrication of a Beacon satellite, the 12-foot Mylar inflatable that was shown publicly at the US Capitol and other sites in the run up for NASA’s Project Echo. Echo 1A, which launched in 1960, was 100 feet in diameter, and was the first visible manmade object in space. In Leckey’s installation, though, the satelloon serves as a reference, I believe, to Echo II, the 135-ft successor, which launched in 1964.
Satelloons have been big around here for nearly 10 years, and I’ve been engrossed by their aesthetic power, and what can only be called their exhibition and display. They are beautiful objects created to be seen, and they have many implications.
Part of this became the subject of “Exhibition Space,” a show I organized at apexart in 2013, which was the occasion for fabricating this particular object. At the time, I was reluctant for a whole host of reasons to declare the show, and the objects in it, to be artworks. But I’m chill with it now, thanks in no small part to Leckey’s own powerful and generous practice over the last several years of curation-as-art, as well as my own subsequent developments.
In any case, a huge thanks and congratulations to Mark Leckey, along with curators Stuart Comer and Peter Eleey, and the folks at PS1, who have been a pleasure to work with. I had no idea how Mark would end up incorporating the piece, but it looks utterly transfixing, and I cannot wait to see it in person.