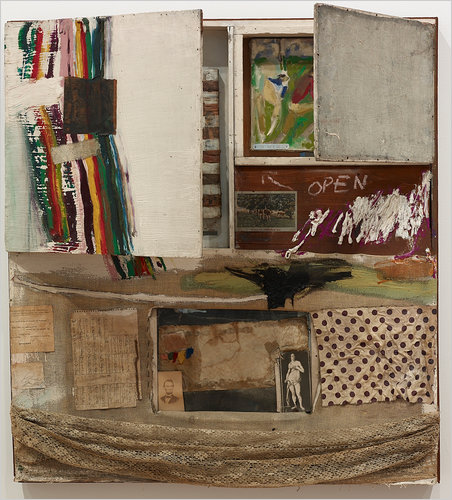 When you go to the Rauschenberg show at MoMA, take your opera glasses.
A question I was never able to figure out was when, exactly, Sturtevant’s Johns Flag took the place of Johns’ Johns Flag after it was stolen in 1965. 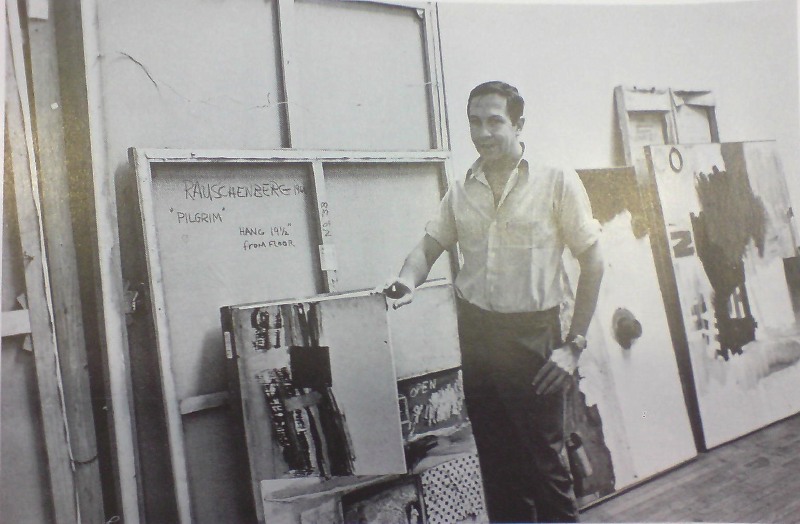 When they split, Johns & Rauschenberg made an agreement that Short Circuit, or perhaps Construction with J.J. Flag, as it had also been known, would not be exhibited. Presumably, with Johns’ Flag gone, Rauschenberg felt free to include the work in a collage-themed group show at Finch College in 1967.
He posed with the work [above], holding the cabinet door ajar to obscure the space where Johns’ Flag had been, and in his artist statement, he said, ” Elaine Sturtevant is painting an original flag in the manner of Jasper Johns’ to replace it.” Is painting, present tense.
Did she finish in time? It’s not clear. All published accounts of the exhibition mention the openable doors with paintings behind them-but also that they were nailed shut. So who knows? Sturtevant’s Johns Flag is like Schrodinger’s Cat, both alive and dead, both in there, and not. 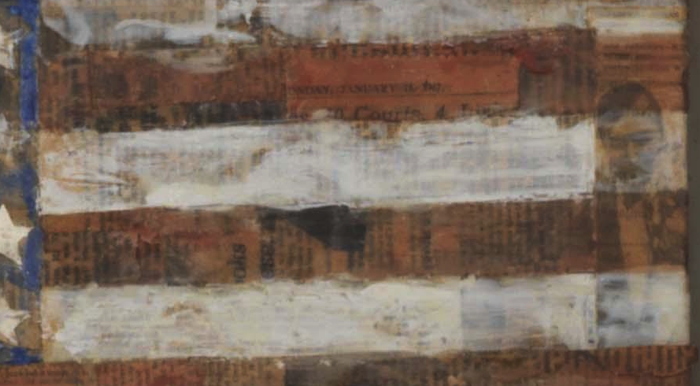 detail of Elaine Sturtevant’s Johns Flag in Rauschenberg’s Short Circuit
But. If you take a close look at Short Circuit‘s Sturtevant Johns Flag at MoMA, you might be able to see a legible scrap of newspaper on its surface. Actually, you can see many, but one has a date: Sunday, January 15, 1967. And a typeface that looks like the Times.

image: nytimesmachine
And sure enough, it is. Page 69. The headline: “Powell Case, in 6 Years, Has Involved 80 Judges 10 Courts, 4 Juries, 15 Lawyers and congress.” The story: a full-page recap of a convoluted lawsuit brought against Rep. Adam Clayton Powell, Jr., involving defamation and allegations of police corruption.
The Finch show opened on March 9th, so it is at least possible that Sturtevant finished her painting in time to put it in. I mean, it can’t be ruled out [the way a scrap of newspaper visible in Johns’ own MoMA Flag dating from after the 1955 exhibition of Short Circuit almost certainly means that the Short Circuit flag was the “first” flag.]
What’s more interesting, though, is to the right. Doesn’t that look like Johns? In a tuxedo? Perhaps attending an opening? I’ve only done the most cursory search so far, and I can’t find a source for that image from 1965-67. Would Sturtevant have kept a party shot clipping from Johns’ Jewish Museum show in 1964? Would Rauschenberg?
Previously, related: Art in Process: Reading Finch College Museum
Jasper Johns’ first Flag