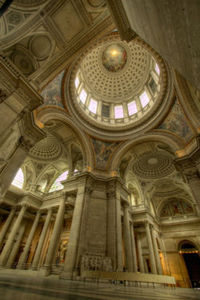 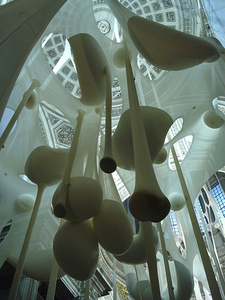 Wow, worlds collide, I feel like I’m in an Umberto Eco novel. At nights over the course of a year, a group of urban explorers in Paris who call themselves UnterGunther slipped into the Pantheon, the national mausoleum for French giants from Voltaire to Hugo to Marie Curie, and the site of Foucault’s original pendulum experiment. [yikes! I am!]

Once inside, they hid behind a wall of fake crates, and set to work restoring the movement of a massive clock, not working since the 1960’s, which they say had been neglected and left to rust into oblivion by the French government. The group enlisted a professional clockmaker, Jean-Baptiste Viot, to help on the project, which required fabricating several parts from scratch.
On October 10 2006, they presented the restored clock to Bernard Jeannot, curator of the Pantheon, who was expressed his profound thanks on behalf of a grateful nation. HAHA, kidding. He was horrified and launched a criminal investigation into the repair of the clock.

UnterGunther’s stated motives for these clandestine restorations–besides restoring things, of course–is to highlight “the incapacity of the French National Heritage administration, Monum, to preserve the heritage it is in charge of.” It’s a message that takes on unfortunate resonance with reports that drunken revelers recently broke into the Musee d’Orsay and punched a hole in a Monet–and then escaped unmolested by museum guards or police.
In an interview last month with the Times of London, who should turn up as the spokesman for UnterGunther’s urban explorer network, l’UX, but that underground cinema guru himself, Lazar Kunstmann. Fascinating and disturbing and invigorating stuff.
Unter Gunther’s report, english [urban-resources.net]
UnterGunther’s home page, with media coverage, in french [ugwk.eu, images above via the TF1 news story, 19Jul07]
Underground ‘terrorists’ with a mission to save city’s neglected heritage [timesonline.co.uk]
Related: Meanwhile, Americans sneak into malls and have parties for a year
Previously, Oct. 10, 2004 [!]: Exclusive: the greg.org interview with Lazar Kunstmann & La Mexicaine de Perforation
Les Arenes de Chaillot subterranean cinematheque’s complete programme guide