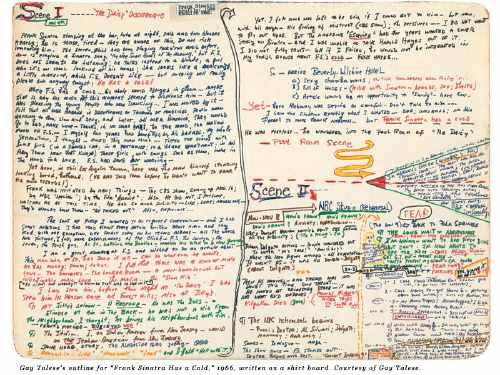 –including the outline for the Greatest Magazine Article Ever?

Robert Rauschenberg developed his abstract/pop collage techniques on shirt boards, while traveling to Italy and Morocco with Cy Twombly in 1951-3. The pair [couple?] of young artists fresh from Black Mountain College were traveling on Twombly’s grant money, which meant Rauschenberg had next to nothing to buy art materials with.
So he collaged cheap prints, newspaper, feathers, drawings, and random stuff onto the shirtboards from their laundry in an irreverent twist of his teacher Josef Albers’ technique.
In 1990, just as Walter Hopps’ incredible show, “Robert Rauschenberg the Early 1950s” was preparing to debut at the Menil, the artist collaborated with Styria Studio to produce meticulous replicas of 20 of the shirtboard works in an edition of 65.
Within the first five minutes of walking into the Menil for the first time, I met Cy Twombly standing in front of his chalkboard painting in the lobby. He had just completed his interview for Hopps’ catalogue. Needless to say, I made it back to Houston for the opening, and then saw the show multiple times at the Guggenheim SoHo.
Beyond instilling a deep appreciation for Rauschenberg’s interest in abstraction and conceptualism both, that show changed the way I look at shirtboards forever. Not that I’ve ever done anything about it, of course, just that it hits a nerve. What’s worse about Gay Talese: he lives in my old neighborhood, so we might even share a shirt laundry.
a nice discussion of the Shirtboard works [icallitoranges]