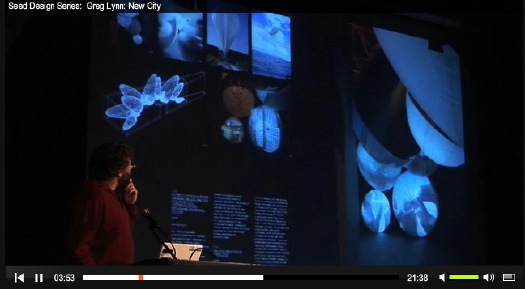 Herbert Muschamp in a giant weather balloon movie in Monaco WHAT?

This is something we did in Monaco where we put Herbert Muschamp’s text, “Bubbles in the Wine,” to film. It was my job to go out and find these weather balloon manufacturers that had these funny-shaped screens that had projectors inside them. And what Peter with Imaginary Forces did was to figure out how to cut a nine-screen film simultaneously so you sometimes get a single image, you sometimes get multiple images on the balloons. 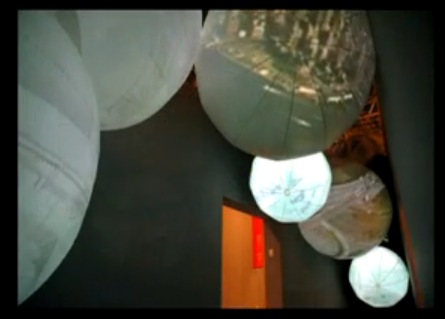 Sure enough, he wasn’t making it up. In 2006, Germano Celant brought in Lisa Dennison to help curate, “New York, New York,” a giant summer show at the Grimaldi Forum. Lynn, Imaginary Forces, and UN Studios worked as United Architects, the collaborative they formed for the World Trade Center rebuilding competition.
Here’s the brief:

UA created an immersive space that told the story of the last 50 years of New York Architecture through an animated narrative, scripted by Herbert Muschamp. Eight synchronized films and a uniquely New York soundtrack told a story of the past, present and future of the city. By suspending eight 20-foot balloons with interior projection from the ceiling and walls, IF transformed the balloons into a new architectural media delivery system. 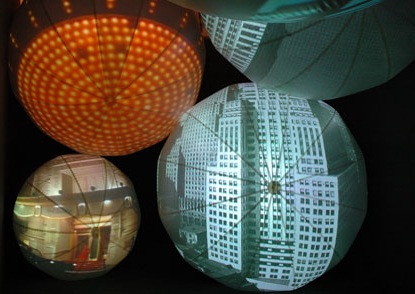 And here’s IF’s quick making of video, which Warner Music Group unceremoniously stripped the soundtrack from:

Hmm. First off, this all sounds straight from the Eameses’ expo playbook. Their collaboration with George Nelson, for example, at the 1959 American National Exhibition in Moscow. Glimpses of the USA was a 7-screen film epic of American material awesomeness, shown in a dome pavilion, and designed to blow hapless Commie minds. [My mind was blown a little bit just by this photo of the Eameses standing inside a mockup of the pavilion. via] 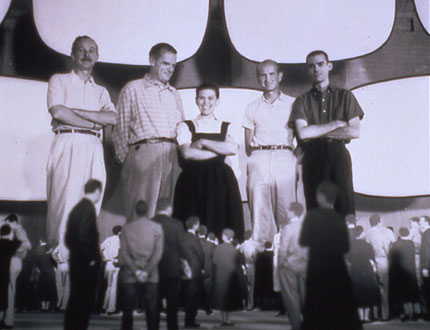 And of course, the Eameses went on to make approximately one million movie/slide/multimedia presentations and exhibitions for IBM, a format which was later cloned in every Park Service visitors center I went to as a child. So on the bright side, there’s no need for a proof of concept!
All told, the installation as realized, with the balloon screens seemingly dispersed on either side of the narrow, Nauman-esque exhibition space, doesn’t seem to have quite the impact that UA originally imagined. Check out the drawing over Lynn’s shoulder above, where the balloons are all clustered like sperm around an invisible egg. [Which would have been you, by the way, the viewer. You were the egg. And Joe Buck was the sperm. Muschamp is whooping in Heaven right now at the thought, I’m sure.] Point is, the panoramic wall is closer to what UA realized in their “New City” installation at MoMA.
Meanwhile, there’s not much online about “New York, New York,” which was subtitled, “Cinquante ans d’art, architecture, photographie, film et vidéo.” From the Art in America writeup, it sounded like a sprawling mess and a bit of a trophy dump, not necessarily a bad thing. Of course, half the article is about expo logistics and insurance and transporting masterpieces [sic], so who knows? Also, I can’t find this Muschamp “Bubbles” essay anywhere online. Please tell me someone somewhere’s working on a collected works.
Monaco starts around 3:30: Seed Design Series | Greg Lynn: New City [seedmagazine, thanks greg.org idol john powers for the tip]
Experience Design | Bubbles in the Wine, 2006 [imaginaryforces.com]