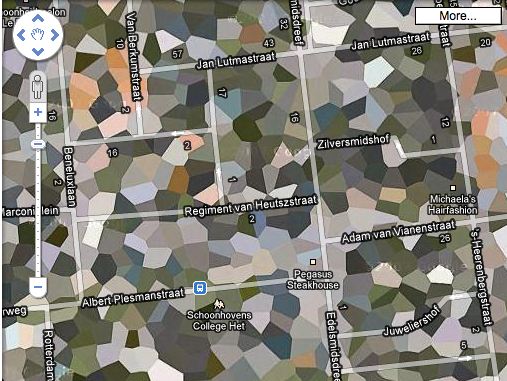 I love it when several plans come together. Apparently, not all the Dutch Google Maps landscapes camo’d out by the Military Intelligence Department are actually sensitive sites. And some sites will toggle in and out of camouflage without warning or explanation.
One such site is the southern town of Schoonhoven, which has been poly’d off the map for most of the last four years, for no security reason at all. 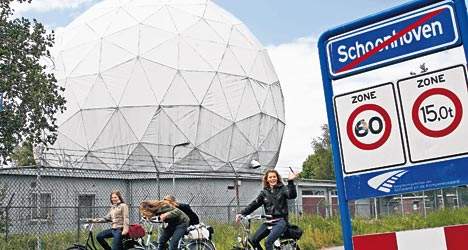 It’s no secret that NATO operated a SATCOM weather station on the north edge of town. The giant, geodesic dome that hid the doppler equipment is a prominent roadside landmark. But the base was decommissioned in 2005, just before Google’s contractor, AeroData, began its hi-res geoimaging flights over the Benelux region.
It was too late to get off the Defense Department’s polygon list, though, and so the entire town is obscured, even the Pegasus Steakhouse [above].
By 2008, with plans for the residential redevelopment of the abandoned base well under way, it was reported that townsfolk were finally being promised year-round, un-camouflaged Google Earth access to their homes. Maybe today was just a bad day.
06-2008: No More Blind Spot [ad.nl, image via ad.nl]
Urbex – NATO Schoonhoven photoset by Marc Duiker [flickr]