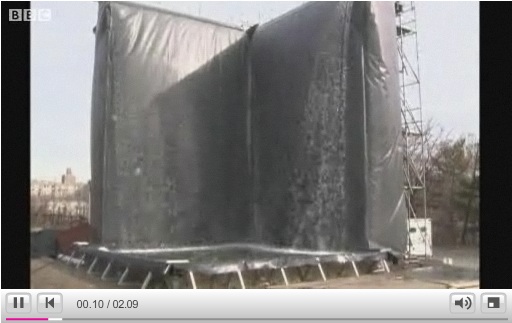 The BBC has nice footage of the mockup for Michael Arad’s World Trade Center Memorial waterfalls, which was constructed in Brooklyn last week. My impression: unexpectedly Olafur-esque.
Also, the [engineer?] guy saying it is to be an “Eternal Waterfall” that never gets turned off. Unless it gets cold or something. File that away for after the Memorial’s dedicated, when we will be able to see/hear if they actually turn the Eternal Waterfall on and off during operating hours, which will seem like the logical/inevitable thing to do.
9/11 waterfall design unveiled [bbc]
The East River School